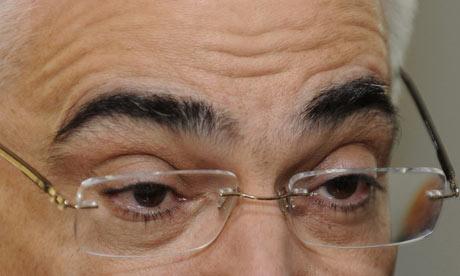 Will it be another knife-wielding Chancellor?

I tend to make a point of looking to the First Post for particularly juicy scoops, and yet again they have delivered. Their article from ‘the Mole’ yesterday indicates that the growing feud at the top of Government is between Chancellor Alistair Darling and First Secretary of State Lord Mandelson.

Mandelson had trampled on Treasury toes by announcing that the Comprehensive Spending Review would be delayed until after the next election – the Treasury shot back that it had not yet made that decision. The issue then becomes who really makes the significant economic decisions – and a turf-war between Mandelson and Darling would be disastrous, when the Prime Minister seems determined to sound less than sure-footed with talks of “a 0% rise” at PMQs yesterday.

The Prime Minister did appear to take the side of his Business Secretary by saying that now was not the time for the CSR, and this adds to a mounting list of occasions upon which the lobby at least feel that the Chancellor has been humiliated. Paul Waugh, who since Ben Brogan moved to the Telegraph has become my favourite of the Lobby correspondents, goes further and suggests that Darling is perhaps the only senior Cabinet minister left with the motive and lack of credentialled cowardice to actually plunge the knife between the PM’s shoulderblades. (Hat-tip to ‘Maggie Thatcher Fan’ for highlighting this article)

Having survived so many aborted coups d’etat on the issue of personality, it would be perhaps ironic if the PM were to be toppled by his Chancellor over matters of economic policy. PB.com veterans will need no reminding of the parallel with Geoffrey Howe, and how damaging it can be for a Prime Minister to lose their next-door neighbour.

So, not Johnson, not Miliband, not Purnell, not Hutton – could it be Alistair Darling who will finally usher the PM out of office by force?