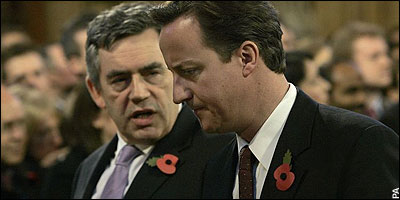 In the last fortnight, there have been a number of occasions when David Cameron has attacked Gordon Brown’s honesty – over debt levels, claims about capital spending, and over growth targets. The language used has been a little more stark than the usual false pleasantries cast across the Dispatch Boxes, and it has been chased up by some corners of the Fourth and Fifth Estates respectively.

I can understand the thinking – if this becomes about the trustworthiness of the PM, then the Tories might well gain: Brown might be largely a truthful man, but there have been a couple of notable occasions when the lie was so brazen as to be embarrassing: denying that the October 2007 election was cancelled because of the polls, and denying that he had planned to move Darling away from the Treasury are the two examples that come to mind. So how to counter this tactic?

A feature of the last week or so has been a focus by senior Labour politicians on the nature of their partisan competition. Last night, I watched Channel 4 editor Gary Gibbon (who has a great new blog) interview Gordon Brown on a train from Leeds. The PM suggested that the standard of political discourse had fallen below the standards that voters should expect. From the C4 news report:

“There is a crudity developed in the language that people use in politics that people are now accepting as almost everyday language. People have got to think twice before they make accusations.”

“I do not make personal attacks on people. I have tried to avoid doing that during my political career. But equally I understand that the language of politics can sometimes descend into people making quite crude accusations.”

He insisted that he was not complaining about personal attacks on himself, but said the language was “out of line with the real issues that have got to be debated”.

Many other PB.com readers will have been reminded of Ed Balls’ complaint this week that David Cameron was employing “agression” and “bullying language” in his tactics at PMQs. Then, in the same week that David Cameron had apologised for the previous Conservative Government passing Section 28, an article on the BBC website was highlighted in our comments, where Labour Ministers Ben Bradshaw and Chris Bryant suggested that homophobia was still prevalent on the Conservative backbenches.

Labour seem to have decided that the best way to innoculate their leader from character assassination is to characterise all personal attacks as lacking in virtue: borne of nastiness. In doing so, they hope to have greater resolve, and to cause the Conservatives onto the murkier, less emotive ground of policy.

The next election was always going to wind up being about whether Labour could convince voters that little in the Tory party has changed. The ‘Toff’ campaign failed horribly in Crewe & Nantwich – now Norwich North on the 23rd July can be the test-phase for “nasty bullying Tories”. It might not resonate that strongly with voters, but if it serves to put doubt in the minds of Conservative attack dogs as to how they’re being seen, it could ease the fire on the Labour leadership as it looks to survive the Summer and Conference Season.