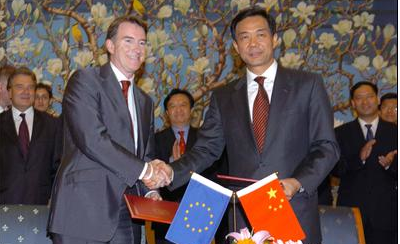 It’s not often that I completely disagree with Our Genial Host, but this week he suggested that Peter Mandelson, Baron of Hartlepool and Foy, was perhaps not as masterful at modern politics as had been claimed. Personally, I think he has handled his third time in the Cabinet with more poise and prowess than he brought to his previous times in office. Indeed, he has yet to have a finger laid on him (those who tried have regretted it), and the perception of his work as Industry Secretary is that he is significantly more able than the vast majority of his Cabinet colleagues.

Peter Mandelson’s return to these shores has been a true blessing for anyone who writes about politics. There are few characters of such colour or presence, and few who could make the survival of the Labour party a realistic prospect at the next election. The Prime Minister should have been toppled twice in the last year, and each time he has been saved by the Dark Lord. Their Faustian pact has taken Mandelson from the finite position of European Commissioner, into the Cabinet, into the Lords for life, and finally elevated him to de facto (if not de jure) Deputy Prime Minister.

Considering the hand he was dealt – mutiny by half the Cabinet, impossible reshuffles, an economic crisis of massive proportions, the expenses scandal, and a PM who has consistently disappointed even his own supporters – it is perhaps staggering that one man has kept them from utterly disintegrating, managed the various ambitious egos, and limited the damage each time a wheel has fallen off the machine. And whilst looking after the interests of the Labour Party and the Prime Minister, he has found the time to gather to himself two departments, the largest number of subordinate Ministers of any Secretary of State, and to handle his day job and promotions.

Looking back, it seems almost criminal how poorly he was utilised by Tony Blair: the DTI was a low-level brief at the time, Minister Without Portfolio bore more jokes than responsibility, and he was ill-chosen to follow Mo Mowlam in Northern Ireland. I’ll let his enemies shiver at the prospect of how high he could have climbed had he not been brought down by a mortgage scandal that seems mild in the light of recent discoveries.

But there is a problem. Where does a man with those connections, those talents and experience, and that reputation go from here? He knows that the next election is all but lost, bar a miracle, but even having secured a legacy in this country beyond scandal and exile I cannot believe that his thirst for power and influence has been slaked. So what on earth will Peter Mandelson do next?

I am not one of the small number who think that, in the event of a sudden Brown exit, a member of the House of Lords could be invited by Her Majesty to act as interim Prime Minister. That job will never be his. The Foreign Office should have been, indeed would have been, if there had been more leeway and more time to oust David Miliband. Now Alan Johnson is settled at the Home Office and Balls is ready to take any vacancy that arises at the Treasury, there seems little left for the former Spin Doctor to capture.

I wondered if he would be offered, and might accept, a role in a Cameron government. Supporting ‘the true heir to Blair’ would have its benefits, not least the delicious irony of defecting from Labour at just the point that it had grown to love him back. But it would not allow him to remain as elevated as he is at present, and the price of treachery is well-known to seasoned operators. So where can he go?

Assuming, I think safely, that he would not be particularly enthused by being leader of the Opposition in the Lords, I suspect that there is one institution where his enoblement is not a bar to promotion, but may even facilitate it. Lord Mandelson was, I believe, highly regarded in his time as Trade Commissioner for the European Union. He held the most powerful and wide-ranging brief on the Commission – with diplomatic and economic matters folded in to boot. He is a staunch Europhile, and has done the EU a great favour by keeping David Cameron’s hands off the keys to Number 10 until the Lisbon Treaty is finally ratified by the last of the 27 member states. What would they have to offer to get him back?

The Guardian has reported that Tony Blair’s plans to become ‘President of the European Council’ are being threatened by Sweden and Spain, both of whom seem to be reluctant for a Galactico politician to create a European Presidency in his image. Blair’s support for Bush in the Iraq War also counts significantly against him. The other candidates are, if I may be forgiven, somewhat uninspiring, so would not this be the ideal move for our own Lord Mandelson to make?

The competancies of the European Union are primarily economic and diplomatic, concerned primarily with trade, and call for a politician of supreme talent. The first permanent President will need to be comfortable under the spotlight, but not desire to be the co-equal of Presidents Obama and Hu Jintao. He will need to be a true believer in the European project, and acceptable to the sceptical countries as much as those at the heart of Europe. He will need to understand the EU inside-out, and have a knack for bureaucratic manipulation. Who better fits those requirements than Mandelson?

There are no formal qualifications for the role – the Guardian article erroneously suggests that it should be a former President or Prime Minister, when some names have been mooted who have never held such positions. Here, Mandelson’s CV of honorifics puts him in as strong a position as, say, former Commissioner Emma Bonino MEP.

Even if his spat with President Sarkozy disbarred him from the job of President of the European Council, I also think he would be considered a strong choice for the unified position of High Representative of the Union for Foreign Affairs and Security Policy.

Politics has been more interesting since Peter Mandelson came back to our shores. I suspect that the end of the Labour government might see him return to the EU, because there is no longer anything more he can do here. The Prince of Darkness will not go gentle into that good night – there is much, much more for him to accomplish.