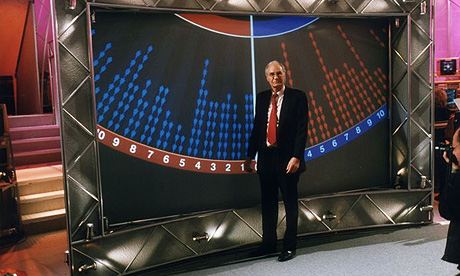 Whereâ€™s the upper limit to Tory ambitions?
Yesterdayâ€™s opinion polls showed the figures returning to something like the position they were in immediately following the local and European elections in June – yesterday’s YouGov poll produced similar results to one on 7 June whichÂ had a Con/Lab/LD split of 40/24/18 and a ComRes poll of 12 June had a split of 38/22/20. In each case, all the comparable figures are within 2% between now and then.

So, not much change, although perhaps we can conclude that Others is slowly heading back towards more normal levels: both polls have Others down by 3%.

Of course, come the election, vote share only really matters in as far as it translates into seats won, with which has a close but not perfect relationship. The Wells and Baxter vote predictors both attempt to turn the one into the other.

Interestingly, considering that ComRes has not always been the most appreciated pollster on pbc, the results of the predictors for the shares in their poll are remarkably close to the spread-betting markets. Wells and Baxter produce slightly different results but predict 353 for the Conservatives, about 200 for Labour and about 66 for the Lib Dems. The Sporting Index market has the Conservatives at 355-360, Labour at 205-210 and the Lib Dems at 52-55.

So if there is money to be made on the spreads, ComRes sets a good baseline against which to measure performance of the two big parties. In essence, thereâ€™s no expectation of change between now and the election on ComResâ€™ figures. The Betfair line market has very similar numbers, with the Tories and Lib Dems a touch lower. Interestingly, the biggest discrepancy is on Others. Both predictors expect about 30 MPâ€™s from outside the big three; the Betfair market implies a little over forty.

Still, we shouldnâ€™t lose sight of the scale of the numbers involved. If the Conservatives do win 353 seats, that will be a little under 150 net gains after boundary changes. If Labour win 200 seats, that implies net losses of over 160. These are really big figures: in the last sixty years, only the 1997 election comes close to the number of seats changing hands.

So could the scale be even higher and if so, by how much (in other words, is there any value in buying Conservative seats or selling Labour ones)? YouGov suggests there might be. The predictors give the Tories around 390, Labour 193 and the Lib Dems 38. But doing it in an opinion poll translated electronically into seats is one thing, doing it on the ground on the day is another. The Conservatives did manage about that total in 1983 but started at a much higher base.

Could Cameron – even in his wildest dreams – win as many constituencies as Margaret Thatcher did at her peak? Indeed, as heâ€™ll struggle to win some that she did – in Scotland or some now-Lib Dem strongholds – can he win seats that she didnâ€™t?

My guess is that itâ€™s unlikely. Practicalities matter and the seats at the outer ranges of the 200-gain scenario will not be being treated as targets. The local parties will vary in strength as will candidates. There may be some surprises but not many.

That matters because the spread and line ought to be determined not just by the most likely outcome punters expect but also on the shape of the probability curve either side. If the curve has a much longer tail on one side, that ought to drag the spread towards that side. To my mind, even allowing for YouGovâ€™s poll, itâ€™s more likely that the Conservatives will win 315 than 395 seats and more likely that Labour will win 240 than 175. If I bet on these markets (and I donâ€™t), Iâ€™d be much happier selling the number of implied gains than buying them.