(This is a post from Robert Smithson, not Mike Smithson!) 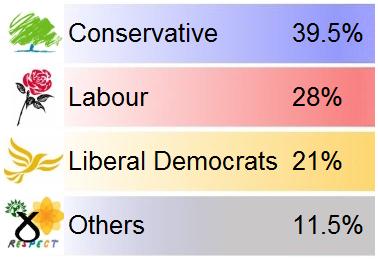 Electoral Calculus says a Conservative majority of 26..
Anthony Wells reckons it results in a 12 seat majority..
Hill & Knowlton has it as No Overall Control..

But could it really be 150 Tory majority?

Yes. Because traditional election forecasting tools are flawed. Electoral Calculus, and the rest, use Unified National Swing as the bedrock of their analysis. But this has a fundamental defect: it assumes parties pile up votes in constituencies where they already have massive majorities, and it assumes that people switch party. In reality, disaffected Labour voters will be more likely to stay home than trudge to the polling booth to vote for David Cameron; just as in 1997, Conservative voters stayed home.

I’ve built a new election forecasting system. This uses the ICM tabular data showing how people are switching between parties (or choosing to stay home), rather than relying on a simple percentage of share of the votes. Using the tabular data in the ICM polls (found on page two of this), adjusted for don’t knows and refuse to says, gives very different numbers.

The new model steps through each seat in the UK, applying the proportions in the ICM data. The result is much more plausible numbers (no collapses in Labour votes, in seats where Labour is already weak), and also a more more likely overall scenario: one where the Conservatives have a large overall majority.

And, based on the latest ICM data, this is what we get:

The model is built in advanced new spreadsheet system called Resolver One, and can be downloaded here. There are plenty of things that can be adjusted – including seperate Scottish vote shares, and incumbency bonuses; feel free to play with it.

This story is also covered in the FT’s Westminster Blog