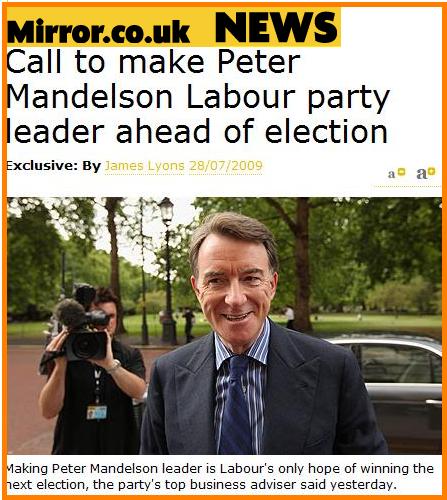 A week and a half ago, while I was still on holiday, I picked up on a story that the government is planning to change the law so that life peers can relinquish their position and so be eligible to stand for parliament. Was this, I pondered, a sign that Peter Mandelson – the former Labour press chief who was booted out of Tony Blair’s cabinet twice – might be in the running?

Last night in a TV interview he was questioned about the possibility and significantly did not rule it out. It’s at the end of this extract.

Certainly in terms of talent and sheer political ability he towers above just about everybody else within the Labour party. Mandy is a class act.

So what we we to make of the Mirror’s story, just out of a call by a senior figure within the party for MPs to “oust Gordon Brown and replace him with the Business Secretary.”

Quoted in the story by James Lyons is Dr Peter Slowe, chair of the Labour Finance and Industry Group, who says: ” “Mandelson is the only one with clout, intellect and charisma in the Labour ranks who could realistically take on the Tories and win at a general election..He is a very good communicator, the best since Tony Blair in the past 10 years. The party has great potential, great ideas and what it needs now is great communication.”

Another Mandelson development today might be seen as hinting that something could be in the offing. He’s suggested that Brown might take part in the televised debate during the election campaign.

This seems remarkable because everything that we know about Brown suggests that he would fight to avoid such a confrontation. Was Mandy making the suggestion in the knowledge that Brown would not be around to do it? It could be.

UPDATE: Gary Gibbon on the Channel 4 blog is quoting a former Cabinet Minister saying â€œexceptionally unlikelyâ€ that Gordon Brown will lead the Labour Party into the next election.