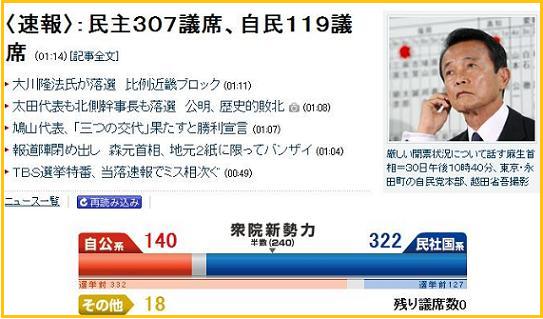 Hatoyama will be next PM, DPJ has majority on its own

The results from Japan’s general election are not quite complete, but what is clear is that the voters have delivered an earthquake to the ruling LDP, which has governed the country for almost all of the last 50 years. The DPJ has confirmed that it will lead a coalition including the Social Democrats and the People’s New Party, despite the fact that it will have about 70 more seats on its own than are needed for a majority.

The Japanese polls (some with samples of over 100,000!) have proved reasonably accurate, and although there were large numbers of undecideds in the figures, these have not broken in favour of the LDP – the country has voted overwhelmingly and decisively for change. The DPJ’s manifesto (something of a novelty in Japan) has been seen as having contributed to their success, while on issues of high salience to the voters, the DPJ was comfortably preferred.

Yukio Hatoyama is expected to be confirmed as the new Prime Minister in a session of the Diet in mid-September, and it’s thought that the new Finance Minister may be 77 year-old Fujii Hirohisa, who has been persuaded to come out of retirement, while ex-leader Ozawa, who quit after a corruption scandal earlier this year, may become the party’s Secretary-General, with some speculation that he will be in a “string-pulling” Mandelson-type role.

For the LDP, it has been a 1997-style rout, with some big names losing their seats, including Finance Minister Yosano, and 2008 leadership contender Yuriko Koike, although outgoing PM Taro Aso and former PMs Mori, Abe, and Fukuda look to have held on, although Kaifu, PM in the early 1990s, looks to have lost.

By far and away the best blog I have seen on Japan is Observing Japan, which is a must-read for anyone following the country – although author Tobias Harris has described new PM Hatoyama as the DPJ’s weakest link. This really is a sea-change for Japan, and we now wait to see how the new DPJ government conducts itself, and what will happen to the once-mighty LDP after this cataclysmic defeat.