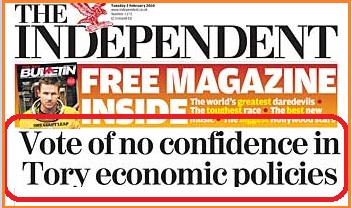 And has it missed the main story from its poll?

Let there be no doubt – the latest poll from ComRes for the Independent showing that the Tory lead is down to just 7% is bad news for Cameron and his team – particularly as it follows a series of such poll findings.

So why the devil has the paper ignored the main story from the poll it spent good money on and splashed a finding that does not even exist.

For readers might be surprised to learn that participants in the survey were not asked whether they had confidence in Tory economic polices.

The headline “Vote of No Confidence in Tory economic policies” appears to be based on the finding that 82% believe that “Mr Cameron should be clearer over what he would do about the economy” with 13 per cent disagreeing.

To anybody but the Indy’s headline writer “Being clearer” is a million miles away from “Vote of No Confidence” and conflicts with other findings.

As Anthony Wells at UKPR puts it in his usual low-key way: “A good sign of a decent question is whether anyone can really agree with the opposite â€“ and how many normal people would say â€œI think David Cameron should be much vaguer and less clear about his plans for the economyâ€?

On confidence in party economic polices the poll found that only 40 per cent of people said they trusted Brown more than Cameron to help Britain’s economy to recover, while 52 per cent do not.

Come on the Indy – your headline has by-passed the main story and focuses on something that is not supported by any numbers. Someone needs to get a grip on your polling coverage.

A paper that likes to think of itself as part of the “quality” end of the market has a responsibility to report things fairly and accurately – especially in a pre-election period like this. Today’s front page falls short.