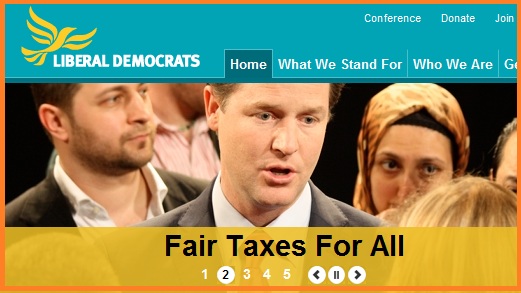 Is this a case of political cross-dressing?

Thanks to those on the previous thread who pointed this out but the Lib Dems have got themselves a new livery for the general election – and there’s a heavy tinge of blue about it.

Given that their main election challenge will be in trying to hold on to many of their seats in the face strong challenges from the Tories it’s hard to conclude that this is not deliberate.

For incumbent Lib Dem MPs could be vulnerable to the argument that the only way of ensuring that Gordon Brown is defeated is by backing the Tories. Maybe the new colours will make the party appear more re-assuring for LD>CON waverers – a critical group in the coming encounter.

These things are important – if they were not then big business would not spend zillions a year on branding? But is there a danger in diluting the party’s traditional colour? What are activists, the foot-soldiers of the coming battle, going to think?

To me the strategy is right but I’m not so certain about the delivery. The blue type on the yellow background does not stand out very well.

Should I be reviewing my Lib Dem spread buy position of 50 seats – maybe to put more on or even to cash it in and take the profits now? All good stuff and we’ll get a lot more of this as we get closer.