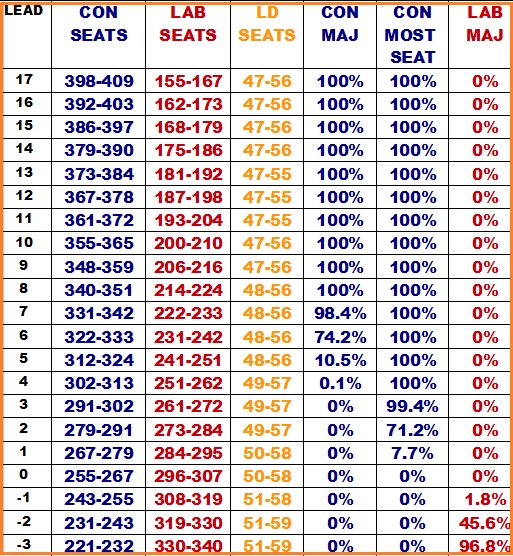 (The above is a revised seat model by long-standing PBers and statistician, Andy Cooke – the first version of which was published here and here after two closely argued papers that questioned the standard orthodoxy about the UNS – the uniform national swing which is the traditional, if not always accurate of projecting the seat totals in the house of commons. Since then there have been no serious defences of the UNS except that this is how it has always been. Sobeit. Andy hads no made more refinements to his model which are – Mike Smithson)

I’ve spent a great deal of time poring through the model and found an error in the high Conservative lead zone. When rebuilding my probabilistic calculator from first principles (to take into account some Excel tricks I’ve learned to enable more precision and ensure that I found any possible mistakes – lengthy process, but necessary for my peace of mind), I aimed to enhance the “aiming” of the marginal boost and add the capability to adjust safe seats (bearing in mind Nick P’s comment on losing support in heartlands to shore up support in marginals).

The aim was to allow a loss of support in safe seats to boost support in marginals (It would also put it in good position to incorporate findings from antifrank’s proposed demographic approach).

I realised that the model as it was added the marginal boost to Labour safe seats – causing excessive effects in the “lead over 10%” zone. The effect in the “where is a Conservative majority” area was negligible, which is why I never uncovered it during my repeated investigations prior to submission – I was overly focussed on the exam question, and the effect was obviously not to be found in the marginals. It does mean that the catastrophic loss of Labour seats at the top of the table is moderated when the effect is removed.

I also redid the model with the latest figures on standard deviation of party swing (the measure of just how variable the swing is), as I had the opportunity to go in detail through the swing standard deviations for the past five elections. The average of these gave a larger figure than the one originally used. This spreads out the “randomness” effect (think of a Bell Curve widening). It means that: