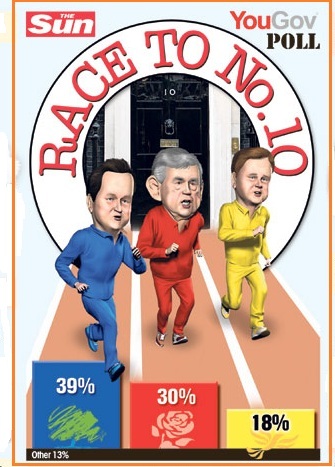 Get used to regular numbers every night

Without much fanfare or advance warning the YouGov Daily Tracker for the Sun was launched overnight and shows a small deterioration in Labour’s position since the last published survey from the firm more than two and a half weeks ago.

Today’s numbers won’t give comfort to any of the main parties. The Tories would feel more confident if they were back in the 40s, Labour knows that it would be foolish to rely on the conventional swing calculators and the Lib Dems are down a notch.

Putting these shares into the Andy Cooke calculator we get a projection of CON348-359: LAB206-216: LD47-56 commons seats with a 100% probability that there would be a Tory majority.

This compares with the crude UNS swing calculators that have this just in hung parliament territory.

The initial plan is for the Sun to run this on four days each week, Tuesday to Friday, rising to a seven day a week poll once the election proper has started.

As I’m sure most PBers will recall YouGov experimented with a tracker during the conference season in late September and in early October with a daily sample of about a thousand. The remarkable characteristic was how the shares fluctuated so much each day apparently in response to TV and other media coverage.

What’s different about this new series is that active steps have been taken to deal with what’s called “early responder” bias – the fact that those who fill in their YouGov surveys quickly might not be representative.

So this new tracker will consist of responses received that day irrespective of when the invitations went out to take part.

Quite a lot of people, particularly in the older age groups, only check their email every two or three days and YouGov wants their views to be included.

The downside of this more stable approach, certainly in news terms, is that we cannot expect the same sort of volatility that was experienced six months ago and we might just get almost the same shares every day.