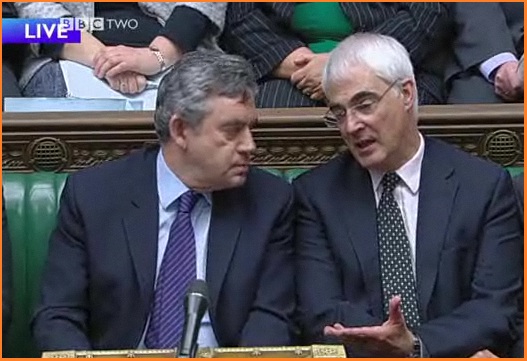 In a world where politicians continually try and rebrand themselves and define their image in the public’s mind, and pay agencies a lot of money to attempt it on their behalf, last week we saw one of the most successful rebrandings for years. It is commonly presumed that the public saw Alistair Darling as a bit dull, inoffensive, but useful, like magnolia paint or carrier bags. Well, that was on Monday.

By Wednesday his â€œforces of hellâ€ quote had changed all that. At the conclusion of a lengthy piece on PM (about 32 minutes in) Simon Hoggart concluded that Darling as Labour leader â€œmight be worth a flutterâ€.

And on Friday Michael Crick wrote this:

“Might Mr Darling be positioning himself to take over from Gordon Brown in the event of an election defeat? Not as a long term Labour leader, but in a caretaker role while the party sorts itself out, and waits for a young, strong, long-term prospect to emerge.

Mr Darling’s reputation has certainly been enhanced during his three years as chancellor, and now, with just three words, he’s managed to distance himself very effectively from the more unpleasant aspects of the Brown regime.

Unlikely? Yes. But I can tell you that the idea of Mr Darling as caretaker is certainly being contemplated by some of his friends.

Whether caretaker status or not (and that would depend on the outcome of the election) Darlingâ€™s ability, as Simon Hoggart says in the Radio 4 piece â€œto keep the temperature downâ€ would be highly useful after a defeat or in a hung parliament. In addition, with one statement Darling has managed to distance himself both from the unpleasant aspects of Brown’s tenure at Number 10, and the culture of spinning assumed (wrongly) to have begun under Blair’s regime.

In the case of a heavy defeat then I doubt Labour would want replicate the mistaken, hasty, elevation of a Hague figure, while in the case of a hung parliament, a consensual, experienced figure such as Darling seems to me to fit the bill. For added piquancy, it is not beyond the bounds of imagination that Darling believes briefings against him may have been linked to a potential rival in any leadership race. He said to the BBC that he stood by his â€œforces of hellâ€ quote â€“ â€œOf course I do, all of it, not just part of it, all of itâ€. Thatâ€™s fighting talk in anyones language.

So on the betting front, before this week Iâ€™d rated Darling as an 8/1 shot for the leadership, after this week Iâ€™d make that 6/1. As the narrowing poll lead and Scottish polling in particular show the chances of him losing his seat in Edinburgh SW receding, I think that the 25/1 available is very attractive.