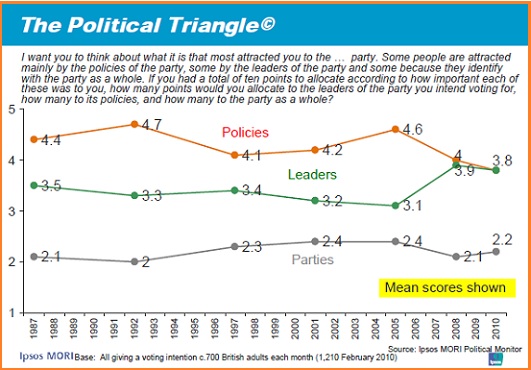 Does this mark a turning point?

Whilst checking out the Ipsos-MORI website overnight I came across a fascinating paper on what the pollster describes as the “Presidentialisationâ€™ of British politics?

The chart is self-explanatory – the leader is becoming more important in the eyes of voters and we could reach a point at this election when it takes over as the main driver.

The MORI paper goes on: “..In fact, past evidence has suggested that voters tend to underestimate the importance of party and leader to their voting choice and to overestimate the importance of policy, perhaps because choosing on the issues rather than on “image” is seen as more respectable and responsible. If this is still true, then the real impact of leaders on the forthcoming election may be even more marked than these figures suggest.

The importance of leaders is particularly marked among those who read tabloid newspapers (4.15 points on average in 2010) and those aged over 55 (4.35 points); broadsheet readers and those aged 18-34 give greater credence to policies in choosing who to vote for…”

Some key numbers from the overnight MORI poll that I’m looking out for are the leader satisfaction ratings. By last month Gordon Brown had made a marked recovery though was still recording a 21 point negative. Cameron still had net positive numbers but the gap was getting closer.

In past elections, notably 1992, the leader satisfaction numbers have proved to be as good, if not better, pointer to the outcome than the standard voting intention responses.