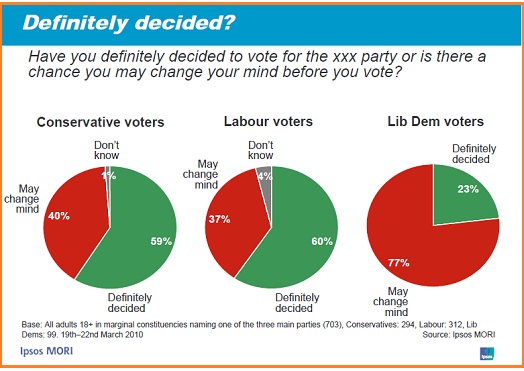 In how many seats could tactical voting be decisive?

The above data from last week’s marginals poll from the MORI poll of the marginals shows that an incredible 77% of LD supporters might switch by polling day in seats where Labour and the Tories are battling it out.

Clearly the more this is framed as a battle between Brown and Cameron the more that this segment will become important. The critical questions are how many will switch and which party will have the balance of the advantage?

Alas MORI didn’t ask a tactical voting question to the Lib Dem segment but to questions on managing the economy the Tories did have a lead – though the size of this sub-sample was very small.

Tactical voting has played a big part in the past four general elections generally to the advantage of Labour. Will the same apply this time?