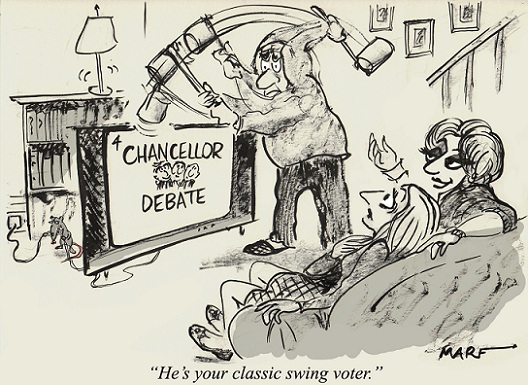 And what are we to make of voodoo polls?

Thanks to PB’s cartoonist Marf for her take on last night’s debate and her gentle reminder that the group that really matters are swing voters.

So who won and what impact will it have? Beware of the voodoo polls – not only are the samples self-selecting but it’s very easy to multi-vote as I discovered last night after recording my preference in Channel 4’s quickie poll.

A message then appeared that I could only vote once – something that was over-ridden by going into “Tools” on the Firefox browser menu and clicking the “clear recent history” option.

If there has been an impact then it will be seen in the next round of proper polling which we’ll get in the next few days.

The view of most pundits was that Vince Cable, as expected, performed best and was the only one to get repeated applause from the studio audience. This will do the Lib Dems no harm though I do worry that Vince, the super TV personality, is developing into his own “separate brand” which might not be doing his party as much good as perhaps it might.

As had been predicted Osborne started with very low expectations but survived reasonably well – though his whole persona does not come over on the small screen. His real skill, and why he is so dangerous, is in identifying opportunities like the one on NI contributions and finding the rhetoric to exploit it. Maybe the Tories should let others do the talking.

Darling’s low-key manner worked reasonably well and he managed to interject on a number of occasions without being over-aggressive or rude. He looks like a decent man wrestling with massive challenges to do the right thing. He didn’t do his party any harm.

In the betting Ladbrokes tightened its price on a Tory majority to 8/13, from 4/6 – a change reflected elsewhere. This is also being helped by the improved Tory poll ratings.