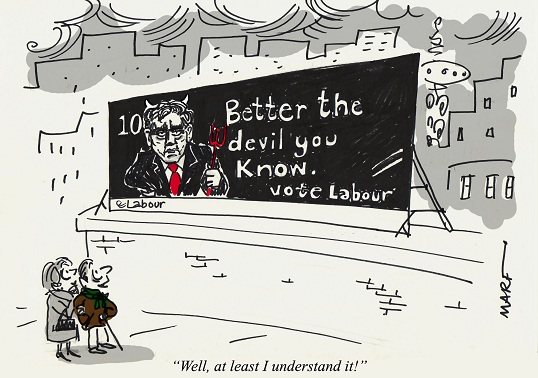 Does Marf’s cartoon hit the nail on the head?

In all the discussion over Labour’s “Gene Hunt” poster everybody seems to have by-passed what the party’s core message ought to be – the need to counter the desire for something different that polling suggests is what getting on for two-thirds of voters want.

For as has been said so often there are only two big ideas in election battles – either it is “time for change” or “don’t let the other lot mess it up”. Marf’s sums up the latter with her usual flair.

When I first saw the Gene Hunt ad I didn’t get it – partly because I’ve never seen the TV series and partly because I couldn’t fathom immediately the 1980s reference. When you are as hard-pressed for cash as Labour is then then what you do do has to have an immediate impact.

Today is, if everything we are led to believe about the election date is correct, the last before official start of hostilities. Brown is returning to the economy and the Tory NI plans in a big speech. That was last week’s battle that they lost.

Going back to the subject is a big gamble especially as the Tories are to launch their own new poster describing National Insurance contributions as “Gordon Brownâ€™s favourite stealth taxâ€.