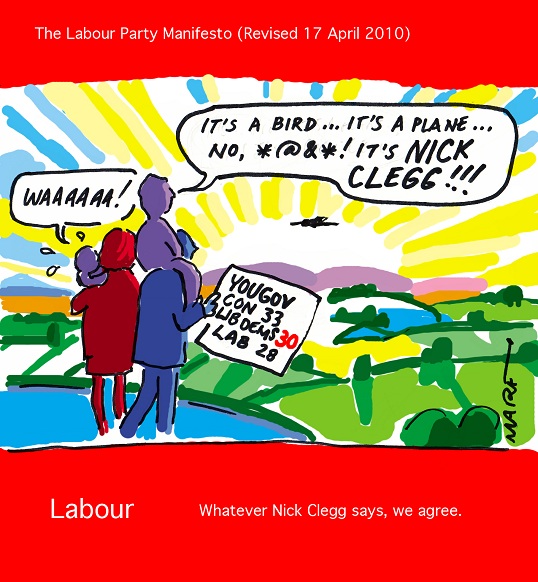 This has been one of Nick Cleggâ€™s better weeks in office. A generally acknowledged win in the first debate – held on an even footing with the other two party leaders, which itself was a bonus on the usual situation – was followed up by a lot of very favourable coverage and yesterdayâ€™s outstanding YouGov poll, placing the Lib Dems within a 2% swing of having the largest share.

In sport, the phrase â€˜peaking too earlyâ€™ is often dismissively applied to teams who put in a great performance early in a competition. Sometimes thatâ€™s right and the side tails off but it doesnâ€™t necessarily follow: at the very least, it makes the competition sit up and take notice.

The momentum is obviously with the Lib Dems at the moment. There are a little under three weeks to go and another two debates. Is it time to look seriously at the Lib Demsâ€™ prospects of winning most seats – something which is priced at 50/1 with Ladbrokes.

Normally, such a bet would be an absurd prospect: assuming around 30-35 Others, the Lib Dems would need an absolute minimum of 210 to be the largest party and in all probability are not fighting seriously (i.e. to win) in anywhere near all of them. However, these are not normal times.

Ever since the Expenses Scandal, thereâ€™s been a very large section of the electorate who are deeply disillusioned with politicians. The vote for Others in the European elections was huge – almost identical to the combined Conservative and Labour share. While negative campaigning might still â€˜workâ€™ in reducing the other sideâ€™s support, thereâ€™s no guarantee it will switch to the one attacking – those voters could just as easily abstain or move to a third party. The upward spike in the Lib Dem share may well be closely related to the amount of time Cameron and especially Brown spent on the offensive towards each other.

That increase in the Othersâ€™ share has now almost entirely dissipated and found its way back to the main three but is clearly still soft and in search of an anti-politics home. Clegg looked and sounded the part and together with Cableâ€™s performance in the earlier debate, has given the Lib Dems two wins out of two – a powerful combination of factors.

Can it continue? The spotlight will now be on Clegg as never before but that could work two ways. There was much speculation that heâ€™d be â€˜found outâ€™ in 90 minutes against Cameron and Brown. Hardly. If – and this is a big if – he can repeat his performance in the next two debates, the Lib Dem share might well rise further still. With party allegiance becoming ever weaker, the opportunity is there as never before.

Unfortunately for them, having spent the last 20 years concentrating their support into winnable constituencies, thatâ€™s now raised the bar as to where the big gains come. The Yellow team really need to be hitting around 37% to be pulling level with the Blues and Reds on a UNS (which may be a more reasonable assumption if voters are reacting to â€˜nationalâ€™ events).

Is 50/1 value? I think it might just be (though how long the price lasts is another matter). If the Lib Dems can poll 30% after one debateÂ win, where would they be after three – and could they maintain the momentum and ride an anti-establishment wave? Two big asks but if so, they can be very, very ambitious about their prospects.