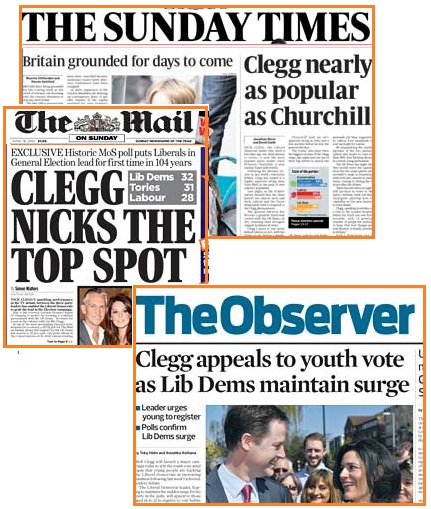 Should the Tories play the immigration card?

With the reverberations of the post-debate opinion polls dominating the political coverage there’s a lot of focus this morning on how Labour and the Tories deal with the new challenge.

To me Andrew Rawnsley is on the right lines in the Observer. He writes:

“Some Labour strategists have sounded happy to join the praise for his performance in the first bout. One of Gordon Brown’s senior aides cheerfully remarked to me on Friday afternoon: “It has blown the election wide open.” They talked up Nick Clegg’s win because it diminished David Cameron and disrupted the general media assumption that the Conservatives were heading for power…..”

But Rawnsley goes on to argue that the recent polling could change everything: “…. If that dynamic shift in allegiances is sustained, if the Lib Dems become the party with all the momentum, who knows what might happen? If there are confirmatory polls placing Labour in third place, then everyone in Gordon Brown’s bunker will need a change of trousers…..

As they also will at Tory HQ where their ambitions to win a majority now greatly depend on finding a way of putting the lid on the Lib Dems. David Cameron’s strategists are already arguing among themselves about how aggressively they should “take the fight” to Nick Clegg. For most of David Cameron’s leadership, his approach has been to try to hug the Lib Dems to death. The Lib Dem leader disdained the Tory’s attempts to love bomb him during the first debate. Influential voices around David Cameron are telling him to forget any more loving and concentrate on bombing. Their visceral instinct is to go for the Lib Dems as wet on crime, reckless on defence, soft on immigration and in love with Europe.

The risk for the Tories is that this lures David Cameron back on to Michael Howard territory and will look like a lurch to the right which is repulsive to the liberal, centrist voters that he needs.“

The first signs of the Tory response, an email to supporters from George Osborne, suggests that immigration might be the line of attack, particularly the Lib Dem call for an amnesty for illegal immigrants. Trouble is that this is something Boris has suggested in the past.

Eighteen days to go – who knows where we will end up?