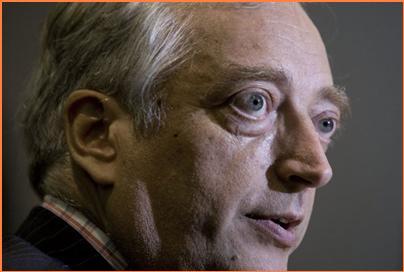 The is Viscount Monckton (Christopher) – the former Thatcher aide who has become one of the world’s leading climate change sceptics and from this afternoon, it is Tweeted, the new deputy leader of UKIP.

Monckton, who has a hereditary peerage but does not have a seat in the Lords, is related to the former Tory Chancellor and fellow climate change sceptic, Nigel Lawson.

He is an experienced political campaigner and will add much communication and intellectual fire-power to the anti-EU party. He’ll also, one assumes, broaden its campaigning base to the global warming issue and in doing so he might make the party more attractive to Tory dissidents who are none too happy with the coalition.

For there is a massive gulf within the Tory party between those who follow the Monckton line and David Cameron who is very firm on global warming. Remember the huskies in the Arctic. He’s also got less room for manoeuvre because of the relationship with the Lib Dems.

A couple of years ago a series of closely argued features in the Sunday Telegraph by Monckton became the tracts for the sceptic lobby worldwide.

This is an intriguing development.