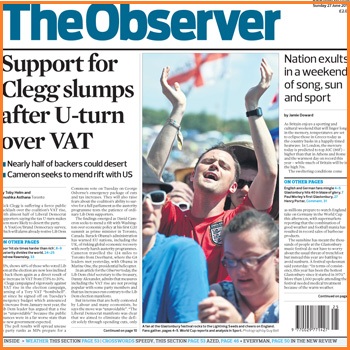 Did the paper even see the full data?

The big story in the Observer, under the heading “Half of Liberal Democrat voters ready to defect after VAT rise” is based, though it is not immediately obvious, on private polling that was carried out by YouGov for the Ed Miliband campaign.

There were two questions which are being made public (because it’s a private poll YouGov does not have to reveal the rest) and the first was on the child benefit level freeze.

The introductory words were: “Below are a series of measures set out by the Conservative and Liberal Democrat coalition in this week’s budget. For each one, please indicate if these would make you more or less likely to vote for the Liberal Democrats, or if it would make no difference?”

The question then read: “The Conservatives and Liberal Democrats plan to freeze Child Benefit for three years. For a typical family with one child, this will cost them up to Â£109 a year.” As can be seen below the response from Lib Dem voters was positive – 29% said they would be MORE likely to vote for the party and 25% said LESS likely.

The paper however reported only the 25% less likely ignoring the bigger proportion saying more likely.

The next question was worded like this: “During the general election campaign the Liberal Democrats specifically promised not to raise VAT, calling it a ‘tax bombshell’. In this week’s Budget the Conservatives and Liberal Democrats outlined plans to raise VAT to 20%.” That surely is somewhat leading and the preamble inaccurate.

Below is the response and once again the paper only recorded those “Less likely” and not the “more likely”.

One of the great things about the polling transparency rules is that this information is made available by the pollster even for privately commissioned surveys.

I wonder whether the Observer saw the detailed spread-sheets from the pollster or was the report based on what the Ed Miliband campaign told them?