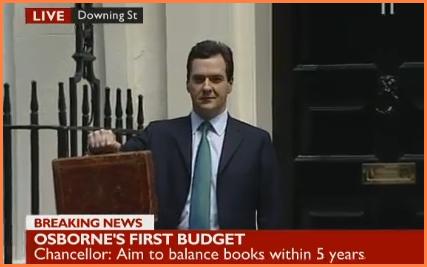 Can the â€˜no cutsâ€™ line really be sustained?

Going in to the election, the Conservatives made a commitment that the NHS and International Development budgets would be protected from any cuts that had to be made should they form a government, a commitment that has carried over into the coalition.

To many Conservatives, these didnâ€™t look like the most obvious departments to make the priority. That no doubt was partly the point – to soften the partyâ€™s image and to appeal to new, non-core voters – and perhaps also helped make the Tories more acceptable to the Lib Dems when the coalition was being put together.

However, times have changed and vested interests in all the departments affected are naturally coming forward in the face of deep cuts in their budget to put their case as to how drastically public services will be affected, how security will be threatened and so on.

While thatâ€™s to be expected, some of the arguments put are likely to strike a chord with the public and – perhaps more importantly – with backbench members on the government side. Weâ€™ve already seen rumblings of discontent about sentencing policy and the impact on the cost of prisons. Another obvious question is how reasonable it is to cut defence spending while troops are serving in active combat (there are no doubt efficiencies the MoD could make but the argument would surely be to reinvest them in the front line)?

Even if cuts to those, and other, departments are acceptable to enough people in the context of a massive budget deficit and tax rises already being implemented, it doesnâ€™t explain the protection afforded health and international development. The exemption for Health could be that itâ€™s been judged to be one fight too many – thereâ€™ll be a lot of people the government will upset in tackling the deficit and health workers invariably start off with the goodwill of the public. Besides, many of the public still see the Conservatives as effectively on probation as far as their handling of the NHS is concerned.

International Development though is another matter. Thereâ€™ll always be support for disaster relief (though thatâ€™s something the public often funds effectively itself, through charitable donation), but thatâ€™s not so necessarily true of other projects.

After all, these are independent countries where government extravagance can usually be identified by a journalist with a mind to do so (as it can for any government). Against cuts in grants to UK-based voluntary projects, thatâ€™s not an easy sell.

Can the line hold? The pledge is something of a petard upon which the coalition has now hoisted itself and as such, climbing down will be awkward. Any manifesto pledge is that. Thereâ€™s also likely to be different pressures on the two parties. There is support in the Tories for current levels of spending on aid but itâ€™s not widespread; my guess is that thereâ€™s probably much more pressure in and on the Lib Dems.

My guess is that despite the relatively low priority the public gives international development in polls of the most important topics for them, this could become a potential flashpoint for the coalition as pressure mounts to find alternatives to some of the unpalatable savings the government proposes.