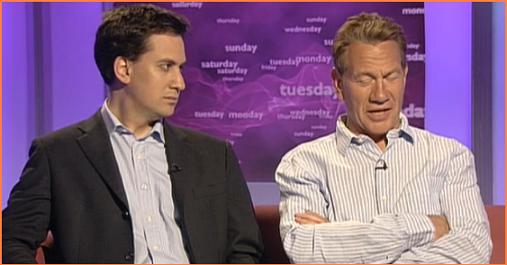 This Week after 10 minutes

What do we think of Portillo’s prediction?

In a lively discussion on BBC2’s “This Week” Michael Portillio made two very interesting predictions – first that EdM would be the next leader of the Labour party and second, that the two coalition parties would go into the next election campaigning under the banner of “The Coalition”.

Unless the whole arrangement falls flat, which is always a possibility, we are talking about what could happen in 2015 – a long way off. Yet could this really take place and what would be the practicalities?

I’ve been trying to get my mind round it and I suppose it means that in LAB-CON marginals the Tory would be branded “Coalition Conservative” and there would not be an LD candidate. In LD -LAB marginals there would be one main opponent to Labour – a “Coalition Liberal” with no Tory standing.

What happened in CON-LD marginals would have to be argued about. This is how seats broke down at the general election based on the lower places in seats won by the three main parties.

Such an arrangement could benefit both the blues and yellows to quite an extent. A problem at the last election was the reluctance of Tory voters in LD-LAB marginals to vote tactically.

Obviously all of this would be different if the AV referendum produces a YES.