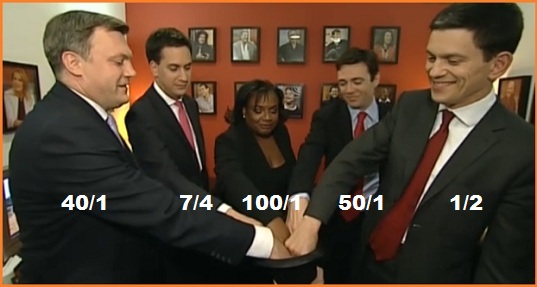 But could the race still produce a surprise?

It was inevitable that the first opinion surveys restricted to those who can actually vote in Labour’s election was going to spark off a fair amount of activity on the betting markets.

The big move has been to the elder Miliband where the best bookie price is now 1/2. His brother Ed has moved out to 7/4 while Balls/Burnham/Abbott are now seen an rank outsiders with almost no chance whatsoever. On Betfair the picture is even worse for the non-Miliband three.

We now move into the holiday month of August with the ballot papers going out on September 1st. The one element that could muck up the YouGov picture of a DaveM victory is the trade union section because the ballots will be accompanied by recommendations from each of the affiliated unions on which way members should vote. With Ed having the backing of the big three then that could possibly close the gap.

Th other thing YouGov did was to blunt the scale of benefit Mili-E would get from 2/3/4th preferences. How these will break is probably going to be less significant than some EM backers were hoping.