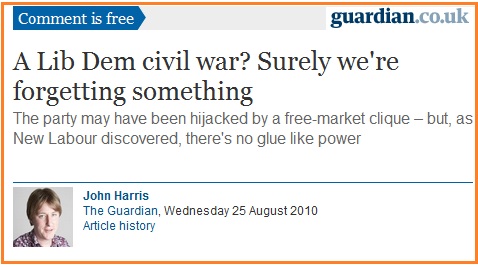 Should the red team look at its own recent history?

One of the most provocative political columns this morning is John Harris’s look at Labour’s view of the Lib Dems by in the Guardian.

He concludes:”… Miserable poll ratings may serve to bind the Lib Dems in, for fear of another election and a real calamity. And one other thing: never forget their deep, burning and often understandable hatred of the Blair and Brown governments â€“ which, given the basic messages given out by the Labour leadership campaign, will endure. As far as Lib Dems are concerned, the two Labour frontrunners effectively cancel each other out: the Miliband keenest to question the last government’s record (Ed, that is) lectures them about the alleged betrayal of their own traditions and jokes about making them “extinct”, whereas his brother is said to be more open to what we must now call “pluralism”, but remains more or less unrepentant about the New Labour fundamentals â€“ and in particular the great Lib Dem irritant cum badge-of-honour that was Iraq.

Yes, this year’s Lib Dem conference will have its moments….But here is what far too many people are missing: that even if the most malign accounts are true and the party has been hijacked by a free market clique, the fact that it has delivered power will probably be more than enough to keep a lid on any trouble. Before Labour people get far too carried away, they ought to remember that until very recently, that was their story too.”

I’m not totally convinced by Harris’s conference point. Lib Dem conferences are much less controlled by the central party machine than Labour and there are fewer constraints on dissident elements. Things could erupt in Liverpool.

The big picture, of course, is that in the last decade and a half all three parties have at some point entered into what amount to Faustian pacts for the sake of power.

The Tory party acquiescence at aspects of the Cameron leadership and now the coalition is a case in point. After all what’s the point of being in politics if you are not in power or striving to achieve it?

Maybe until the events of May 11th many on the yellow side took a different view. Now for them the world has changed. It is far better, surely, to be under sustained fire than to be sitting on the opposite benches experiencing the impotence of opposition?