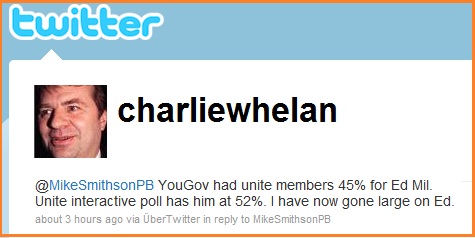 Apologies to PBers who are bored by the Labour leadership but this is a huge political betting event which is all going to be resolved on Saturday and many have large sums at risk. The outcome, of course, will have a major impact on British politics for years to come. Labour is electing someone it hopes will be the next Prime Minister.

So far today we’ve had Dan Hodges at Labour Uncut saying that DaveM has won while the outgoing political director of UNITE, Charlie Whelan, has posted the above Tweet suggesting that his union’s members are going to the younger brother.

My reading is still that the Labour membership will broadly be split 50-50 and the big issue is whether EdM’s lead in the union segment of the electoral college is enough to out do DaveM’s lead amongst MPs.

Nick Palmer reckons after soundings that MPs will split 54-46 in favour of DM – that’s slightly wider than another estimate passed on to me this morning which had a 6% DaveM lead in this section.

Rumour warning: We are likely to see many rumours in the next few days about how the count is progressing which could affect the betting. Ignore them. The counting is taking place in secret without any members of the Labour party or the campaigns being there. There have never been accurate leaks before and I don’t expect them this time.