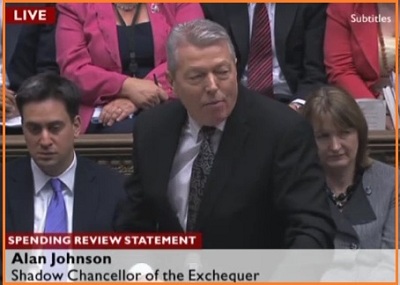 Is this what will determine the public’s reaction?

What struck me about Alan Johnson’s response to the statement and the interviews with Labour figures over the past few hours was that their initial line of attack was that the cuts package is being imposed for ideological reasons.

The suggestion being that many Tories want a smaller state and they are using the “cover” of the deficit to make changes in the way the that country operates for more than just the need to get the public finances right.

This was, of course, the theme of much of the party rhetoric before the election – that somehow Labour cuts are good and the Tory ones are bad.

A big problem since the creation of the coalition is that its harder to make this point stick. This is not just about the “Tories” – and all they mean by that word – but the blues’ partners in government as well, the Lib Dems.

I wonder whether this is the main reason why Labour is so furious about the Lib Dems being in government? For after two decades of being able to blame “the Tories” and to make the term a dirty word they are faced with a new situation for which their old rhetoric doesn’t have the same potency.