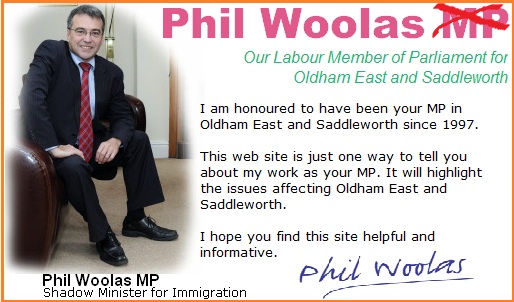 Can the Woolas factor be so easily sidestepped?

The first proper by-election of the 2010 parliament looks set to be a cracker. All three main parties in contention but with Labour having a particular local problem, the Lib Dems well down in the polls from May and the Tories starting in third place itâ€™s surely all to play for – especially once any number of minor candidates are thrown into the mix too.

You wouldnâ€™t think so from the betting, where Labour are 1/2 with Ladbrokes for example with both the Conservatives and Lib Dems at 4/1, implying the reds stand more than three times the chance of either the blues or yellows of winning.

At the election in May, now voided, Woolasâ€™ majority was just 103, or less than a quarter per cent of the votes cast. The Tories also finished within 2500 of winning, which in normal circumstances would make it very much a target seat. That all three parties have won it (or its predecessor) in the last twenty years demonstrates again just what a three-way marginal it is.

Labourâ€™s best bet looks to lie in hoping the field is split against it. The Lib Dems have been the main challengers to Labour since 1997 but while their vote was almost static this May, there was a near-10% swing from Labour to the Conservatives. Obviously, the Labour negative campaigning against the Lib Dem may have had something to do with that. Still, it does mean that a crucial aspect of the early Tory and Lib Dem campaigns will be establishing which is better placed to dislodge Labour.

Labour does have the advantage that it is well up in the national polls since the general election and a crucial question is the extent to which that feeds through. After all, there are significant local factors in this one – itâ€™s not a run-of-the-mill by-election. As well as a split opposition, for the Labour candidate to win, he or she will need to convincingly answer the questions those factors throw up. However, itâ€™s quite common for parties to be punished when they inflict unnecessary by-elections on the public and despite it being a court ruling brought by the Lib Dems, Iâ€™d be surprised if the responsibility for the vacancy lands anywhere other than on Labourâ€™s doorstep.

The pressure will be on the Lib Dems as well. Without a by-election win in nearly five years, this is the sort of contest theyâ€™d have walked before the general election. But weâ€™re in a different political world now. Not all their actions have been popular with their supporters and their polling is down by between a quarter and a half, depending on which firmâ€™s doing the polling. On a straight UNS theyâ€™d be in third, though if thereâ€™s one thing thatâ€™s almost guaranteed, itâ€™s that there wonâ€™t be a straight UNS swing.

That brings us to the Tories. If the Conservatives are to win an overall majority in 2015, itâ€™s seats like this they need to win. However, itâ€™s more than two decades since the party won a by-election in government and closer to three since it gained one from another party. Pushing through a cuts programme – even if most Tory supporters still blame Labour for it – is hardly the best backdrop to be fighting against to make that breakthrough.

So Labour as favourites? Probably, based on the national picture, even though that picture will be heavily distorted via a local prism. Labour as moderately heavy odds-on favourites? No. In fact, at this stage Iâ€™m a little surprised that any party is odds-on.