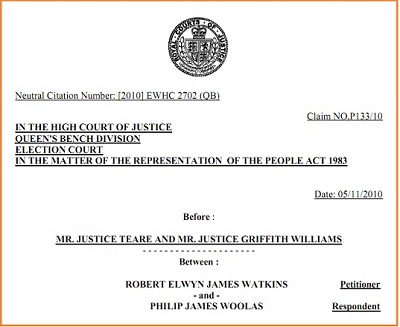 Click on the panel above to download the 57 page judgement in the Woolas case. It’s a good read and those who bother should avoid contributing to the crazy debate that’s developing over the implications – much of which is based on ignorance.

This is the specific law, section 106 of the Representation of the People Act 1983, that the court decided had been breached by Mr Woolas:-

(1) A person who, or any director of any body or association corporate whichâ€”

(a) before or during an election,

(b) for the purpose of affecting the return of any candidate at the election, makes or publishes any false statement of fact in relation to the candidateâ€™s personal character or conduct shall be guilty of an illegal practice, unless he can show that he had reasonable grounds for believing, and did believe, that statement to be true.

This is all about false statements of fact in relation to a candidateâ€™s personal character or conduct and nothing else.

The main arguments at the hearing in September were whether certain statements about Woolas’s Lib Dem opponent were in fact false, and were in relation to his personal character or conduct.

Thus the Indy on Sunday’s, John Rentoul, is entirely right to Tweet that Tory MP, Robert Halfon, has got it wrong in a piece on Michael Ashcroft’s ConservativeHome.