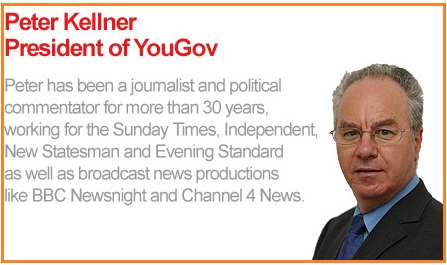 Should the lead be 10 percent plus?

The president of YouGov and well-known Labour supporter, Peter Kellner, has put the cat amongst the pigeons with an article this afternoon saying that his party should be doing substantially better in the polls.

He points to the current 32% – 54% gap in YouGov’s government approve/disapprove numbers and suggests that current conditions are ones “in which the main opposition party should be miles ahead, not a measly five points. ”

This is particularly so because unlike before the creation of the coalition Labour is now the “only major, Britain-wide opposition party”. Labour has an effecting anti-coalition monopoly yet is failing to attract enough of the anti-government support.

Looking forward, of course, the current effective three sided choice that voters have – supporting the government, Labour or the minor parties is not likely to exist at the general election. The coalition partners will probably go their own way for the campaign presenting a four choice range of options.

The polling situation is made much more complicated by the fact that a large slab of Tory and Lib Dem voters from last May are simply saying now that they “don’t know” – rather than switch to Labour. One reason why ICM is showing a different picture for the LDs and, to an extent, the Tories is that it operates its formula for dealing with the “don’t knows” who say they will vote. The pollster allocates half in line with what those people said they did last time.

If all the pollsters operated in a similar fashion then Labour’s position would looking nothing like as it does at the moment.