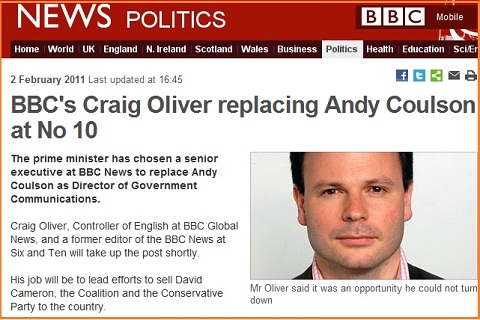 Is TV experience key in the political PR battle?

As someone who spent a chunk of my early career as a BBC journalist and editor I think that Cameron has made the right call in choosing a broadcasting news man to be head of communications at Number 10. The move is in sharp contrast with Ed Miliband who has recently appointed two senior newspapermen to fill his key communication roles.

I’ve no knowledge of Craig Oliver himself but his background seems ideal for 2011’s hectic 24/7 news cycle.

For having an instinctive feel for what will work and how things will play on the TV and crucially the timing, I’d suggest, are much more important than newspaper experience.

For a 10 – 15 second clip of, say PMQs, on the 6 o’clock news play a bigger role in shaping opinion than, say, a few paragraphs penned by Kevin Maguire for the Mirror. So much much of how voters perceive politicians is based on those fleeting glances.

It’s said that the broadcasters rely on papers a lot to set the agenda – a view expressed tonight by James Foryth on the Speccie Coffee House blog. Maybe that has been true in the past but it is much less the case today. What’s a good story in TV terms, because of the power of moving pictures, can be totally different from what works in the press.

On the fact of it then – an interesting appointment. Let’s see how it works out in practice.