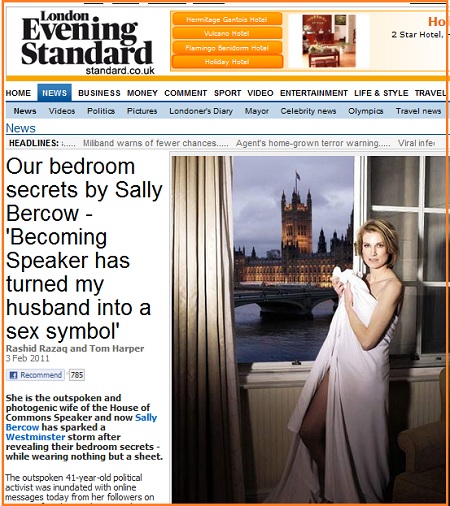 The full feature’s out later – and it’s free

After a couple of months when there’s been much muttering at Westminster about the speaker, John Bercow, his wife, Sally, has sparked of more controversy with an interview and photo-shoot that will be appearing in full in a few hours time in the Friday magazine of the London Evening Standard.

For the “taster” on the Standard website has, not surprisingly, been getting massive coverage and, no doubt, that will continue when we see the full feature.

This is set to become one of those classic pictures that will be shown time and time again. Also of interest have been Sally Bercow’s quoted comments. She says:

“The view from Speaker’s House is incredibly sexy, particularly at night with the moon and the glow from the old gas lamps. When John and I were first courting we used to walk along the South Bank and look at the Houses of Parliament. I never realised how sexy I would find living under Big Ben with the bells chiming.”

In an interview with ES magazine, out tomorrow, she added that her 47-year-old husband’s elevation to the ancient office has made him a hit with women.

“Politicians as a breed aren’t particularly sexy but I think politics can be sexy because power is an aphrodisiac,” she said. “Since John became Speaker, the number of women who hit on him has gone up dramatically.”

So what’s this going to do to the speaker’s detractors? Is it going to fuel their fury or make their task more difficult? I think the latter. Sally is big news and anything that puts the focus on her rather than her husband will, I believe, ease the pressure on him. It’s very difficult to attack someone because of their spouse.

Last night Sally wrote on Twitter: “Oh bugger. I’ve been done up like a kipper. Mr B is going to go potty – Tis a great pic though.”