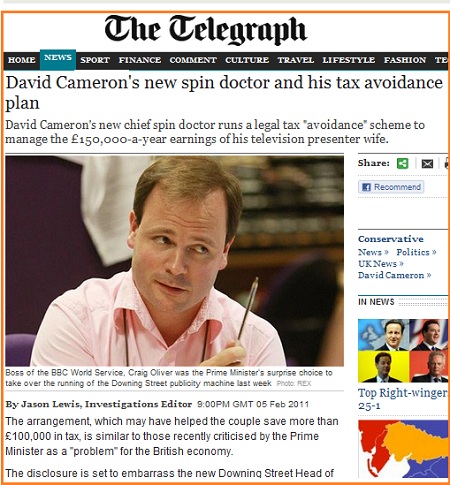 Bang on target and totally true to form the Telegraph welcomes Number 10’s new communications chief, Craig Oliver with a close look at his financial affairs.

For whenever a new figure emerges on the political scene the paper runs stories like this. Some of them, like those about David Laws, can have a big impact – others like the missives about his replacement, Danny Alexander, get forgotten about in a couple of days.

The paper alleges that Oliver and his wife have arranged their tax affairs so that they’ve saved Â£100,000. The scheme is said to be similar to those recently attacked by Cameron as a “problem” for the British economy.

The paper says: “The disclosure is set to embarrass the new Downing Street Head of Communications days after he was appointed as a “safe pair of hands” to replace Andy Coulson, the controversial former News of the World editor, in the Â£140,000-a-year post.”

Essentially the Oliver’s wife, TV presenter Joanna Gosling, has her freelance income from the BBC paid into a company of which Oliver is the company secretary. Against this income certain expenses, like running a car, can be offset.

It’s known that a number of BBC presenters operate in exactly the same way and, indeed, my modest freelance earnings from the BBC go into a business account against which I can offset expenditure.

But although this is hardly earth-shattering it does show the dangers of the government moving its “clamp down on tax evaders” rhetoric into the perfectly legal area of tax avoidance.

This will be chucked back at Oliver for a few days but it is hardly on the scale of phone-hacking.