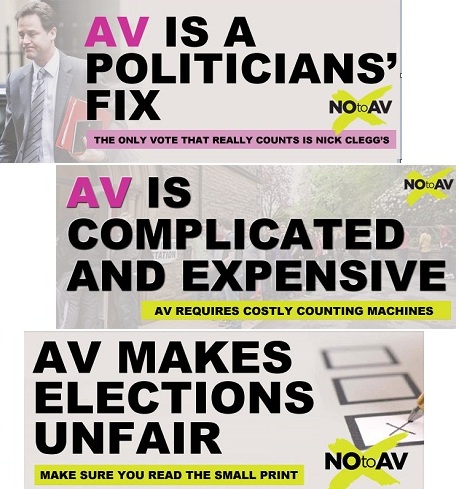 Is this why it’s floundering in the polls?

If the government’s business managers are able to get the referendum and constituencies bill through both houses then the referendum of voting reform will be put to the British people on May 5th – just eleven weeks away.

Away from Westminster the big developments in the past few days have been a move to the YES camp in the polling. With two firms asking very different questions showing the same trend then it’s starting to appear that the momentum is on the side of those wanting change – not those fighting for the status quo.

Of course this is early days yet and we haven’t seen the campaigns but from what is available I wonder whether NO is having problems producing a simple coherent message that will cause voters to ponder and stick with what they’ve got.

The above “ads”, from the No to AV website, suggest that they are a long way from finding the “killer” argument. Do they attack Nick Clegg, raise issues over the cost or suggest that AV will be unfairer without setting out why?

The top one seems to be based on classic Westminster village thinking and is incoherent. The bottom one simply backs out of making an argument but tries to hint that there’s something voters should be concerned about. It’s doesn’t work.

The middle one about AV requiring “costly counting machines” is easily comprehended but is a classic case of argument dilution. It’s such a weak point it undermines others. It’s like a wife telling her husband that she’s leaving because of his philandering and constant drunkenness and then adds that he’s got smelly socks. He’ll focus on the last point to make her sound petty.

A significant proportion of voters on May 5th, I’d suggest, will arrive at the polling stations without any real idea of the arguments. Their prime reason for being there will be the local/Scottish/Welsh elections taking place at the same time. They’ll probably have a fuzzy awareness, because they’ve been told so repeatedly, that YES is about the nebulous concept of “fairer voting”. What’s the argument in a simple short phrase for keeping FPTP – the other option on the ballot paper?

At the moment we haven’t seen one.