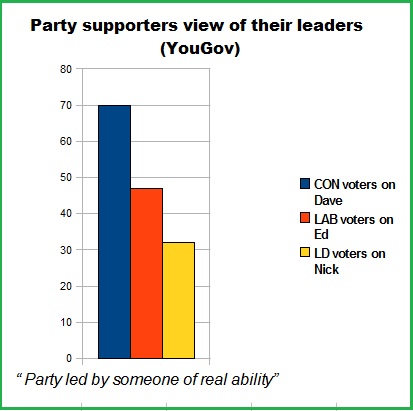 One of YouGov’s fortnightly trackers is to ask about voters’ perceptions of the three main parties including a question on leaders. Panellists are asked “Which party do you think it applies to most – the Conservatives, Labour or the Liberal Democrats? – “Is led by people of real ability”.

You would expect those sampled to choose the leader of the party that they say they’ll vote for and that certainly happens with the Tories with 70% choosing Cameron.

I’d never notice this before until it was picked up by Paul Waugh of PoliticsHome – that Labour and Lib Dem voters are far from enthusiastic about Ed and Nick. Just 47% of Labour voters said Ed Miliband and only 32% of Lib Dems had Nick Clegg.

Given the polling took place at a time when the latter has been subject to a massive battering the Clegg figure is not surprising. But what about Labour voters and Ed Miliband? That 47% doesn’t look very healthy.