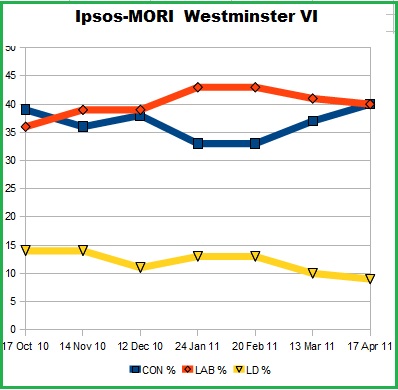 The Ipsos-MORI Monitor for April is just out and has the Tories on 40% – three up on the general election last May and at their highest level with the pollster since then.

The blues are now level-legging with Labour and this is the first poll from the firm since October with Labour not in the lead.

As can be seen from the chart the firm has the yellows continuing to decline amongst those “certain to vote”. MORI headline figures are restricted to this group.

So far there does not appear to be an AV finding. That might be coming later.

There will be more from this poll when the detail appears on the firm’s website.