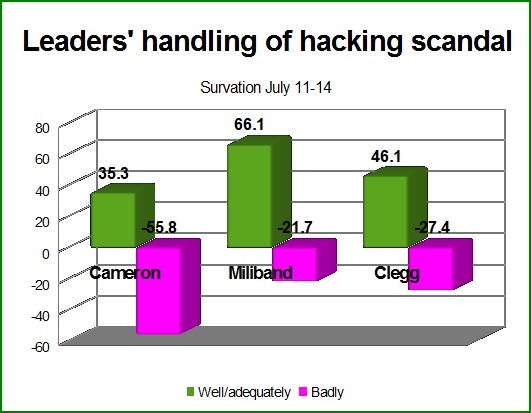 And Clegg’s comfortably in second place

There’s some new hacking scandal polling from Survation – the firm that carried out an initial poll on the issues raised for Channel 4 last week.

Fieldwork was carried out between Monday and yesterday and the online sample was was 1069. The client was an organisation called Progressive Polling which has been set up to commission surveys on issues which they are interested in.

Most of the findings have either been overtaken by events or are not that much different from what their Channel 4 survey and what the YouGov and ComRes polls have come up with.

The findings I’m featuring are the responses to the questions “How do you feel that Cameron/Miliband/Clegg has handled the controversies over hacking allegations so far?”

Because of the fieldwork dates most of the responses came in before Wednesday’s PMQs and Cameron statement when the PM appeared much more assured on the subject than he had been a few days earlier.

Survation is a relative newcomer to political polling and is a member of the British Polling Council. It has carried out surveys for the Mail on Sunday as well as Channel 4.

Next week I’m expecting polling from at least two of the established phone firms. No doubt they will also have asked questions similar to the Survation one.