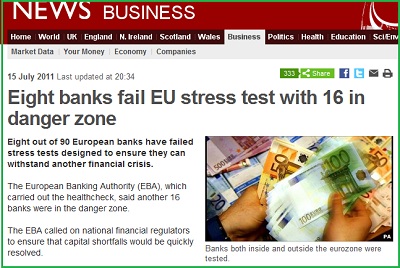 How serious is the debt crisis going to get?

It is a measure of how preoccupied the media has been with the phone-hacking scandal and the associated stories of the aborted NewsCorp takeover of BSkyB that prior to Thursday, one or other aspect of it formed the subject of Robert Pestonâ€™s previous sixteen blog entries. It is without doubt a major and developing story and fascinating to the Westminster Village as it involves so many of them. But momentous though itâ€™s consequences may be, itâ€™s still not the most important ongoing story of the moment.

That story is the debt crisis. Seant commented earlier this week about the parallels between the financial events of this era and those of the Great Depression and there are many. That crash, like this one, was caused by a mixture of private and public debt getting out of control; banks lending against ever-increasing asset values which they assumed would continue to inflate; borrowers eager to buy a piece of the action with money they didnâ€™t have; governments happy to spend the taxes the activities appeared to sustain. There are of course significant differences too, the actions of the central banks in keeping the money supply flowing being one of the most important.

Even so, the bad debt has worked its way further and further up the chain, starting with the individuals who faced bankruptcy when they couldnâ€™t pay their sub-prime loans, through to the banks who landed themselves with the bad debts, and on to the governments who bailed them out. We are not necessarily at the end of that process.

This week, parliament voted to increase Britainâ€™s contribution to the IMF (which itself will have to be paid with borrowed money). At about the same time, Italyâ€™s parliament has been voting on an austerity package with the aim of staving off the need to go to the IMF, a road already travelled by Ireland and Greece. What those two countries also have in common are short-term government debt which is unsaleable at affordable rates.

All this is bringing two venerable international institutions under serious pressure: the EU and the IMF. A default by a Eurozone member shouldnâ€™t necessarily be terminal for the currency – US states have defaulted in the past and the dollar survived, though as thereâ€™s no federal EU government itâ€™s slightly different – but it could become so because so many believe it to be so. Even if the financial side survives, there is, and has been for a while, a notable Eurosceptic drift across the continent as nationalist parties improve their vote shares and even countries like the Netherlands reject EU treaties. The two are in any case linked: staving off a second banking crisis caused by sovereign defaults would require a scale of European cross-guaranteeing well beyond that already agreed and perhaps beyond which electorates would agree.

The issue for the IMF is more simple: how can it cope if too many big countries all need to borrow money? With so many countries running sizable deficits already, for how long can those countries whose borrowing is just about under control persuade the markets to lend them even more money to lend on via the IMF to those whoâ€™ve lost control? Itâ€™s all dangerously circular and reliant on nothing too big happening.

Which brings us to the elephant in the room: the USA, where discussions have been ongoing throughout the month to increase the debt ceiling, without success. The politicians there have until a fortnight on Tuesday to agree an increase before they run up against payments that they say cannot be funded without one. Already the credit ratings are getting nervous about the risks involved in going so close to the brink. With the problems in the Eurozone, Japanâ€™s tsunami-battered areas and Britainâ€™s deficit, itâ€™s unsurprising that gold (and the Swiss Franc) are at record highs.

The hacking scandal will subside, leaving a trail of former journalists and maybe even proprietors behind but ultimately papers will continue to be published, TV stations will go on broadcasting and the public will buy what appeals. Meanwhile, the world is changing – not quite as quickly but far more fundamentally.