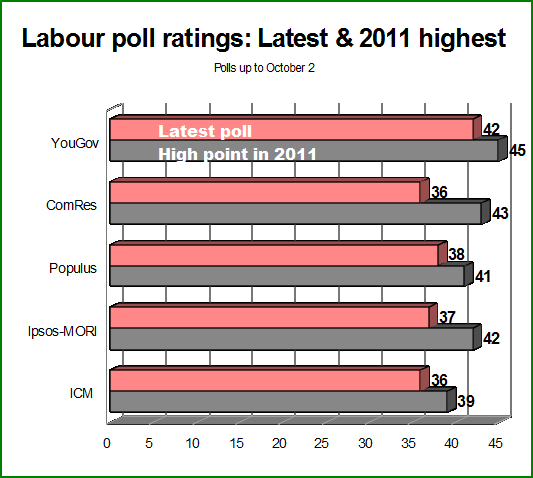 Surely the party of the Two Eds should be miles ahead?

Something curious is happening in British politics. The economy is weak, unemployment is running at 2.5m, and significant, and unpopular, cuts in public spending are being pushed through. In such a situation, one would expect the Opposition to have opened up a big lead in opinion polls, and to make sweeping gains in local elections. In the run up to the last election, plenty of commentators expected the new government to become one of the most unpopular in history.

Yet, this hasnâ€™t happened. For several months now, the average Labour lead over the Conservatives has been in the range of 3-5%, and the partyâ€™s performance in local elections was distinctly underwhelming. Although Labour would certainly win an overall majority if the result of the next election matched current polling, in practice, that is most unlikely to occur. Governments tend to gain ground as the election approaches, as voters start to compare the devil they know with the alternative. Labourâ€™s current lead is simply not sufficient to indicate that they are likely to win the next election.

The easy answer to this would be to blame the partyâ€™s Leader, Ed Milliband. His ratings are generally poor, despite a shift upwards at the height of criticism of News International. Worse, from his point of view, they are usually worse than those of David Cameron. When asked to choose which candidate would make the best Prime Minister, voters choose Cameron by substantial margins. Notably, Yougov, which generally gives Labour its best ratings, tends to find that the Labour lead disappears completely when panel members are asked to choose between a Conservative government led by Cameron, and a Labour government led by Milliband.

Yet, I think it would be unwise for Labour to conclude that a change of leader would be the magic bullet that would guarantee them victory. The Conservatives chopped and changed leaders regularly during their years in Opposition, to no effect.

In truth, Milliband is not obviously a bad leader. Apart from the appointment of Phil Woolas, he has not made any notable errors. It is difficult for any Opposition leader to gain publicity, and very easy for a Prime Minister to do so. Neither Margaret Thatcher nor Clement Attlee were particularly able leaders of the Opposition, but both were highly successful Prime Ministers.

To my mind, the economy is a far bigger problem for Labour. Most voters (including many Labour voters) consider that the last government handed over an economy in dreadful shape. One recent Yougov poll found that five times as many voters blamed Labour for the current state of the economy as blamed the Conservatives. Voters are far readier to blame Labour for the current cuts in public spending than to blame the government. None of this means that the governmentâ€™s policies on the economy and public spending are popular. They are not at all popular, but they are regarded as necessary, and in any case, they are widely seen as the fault of the previous government.

Most striking is the fact that George Osborne, an unpopular figure with the public, is still more highly rated by voters than his Labour Shadow, Ed Balls. Labourâ€™s difficulty is that bad economic news is not being blamed on the government. Moreover, its argument that it would reduce the public sector deficit at the same time as cutting VAT, and opposing many of the cuts in public spending, does not come over as credible to floating voters.

Governments canâ€™t go on blaming their predecessors for ever. Sooner or later, the voters expect them to improve things. Luckily for the government, however, public expectations are so low that the government does not need to achieve very much in order to gain credit among the public. We may be facing a situation similar to that of the 1930s, in which the public fixed blame for the Great Depression firmly on Labour, and the National Government was seen as the only economically competent choice.