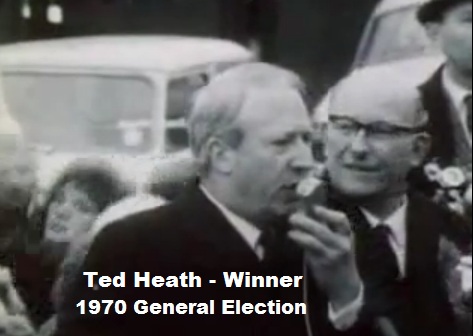 The Guardian’s Polly Toynbee caused quite a few guffaws yesterday following her piece suggesting that Ed Miliband had a good chance of winning the 2015 general election.

Since that was written we’ve had two polls – ComRes and the latest YouGov – showing Labour with four and six percent leads, both sufficient even with the planned boundary changes to produce a very healthy majority.

The big hope that you hear from the blue team is that even with big Labour leads Mr. Cameron enjoys very clear margins in the leader ratings. When it comes to the crunch, they argue, Mr. Miliband hasn’t got it.

Perhaps those sharing this view ought to look back to the 1970 general election when a new Tory leader with an awkward manner beat the media savvy Harold Wilson even though he was miles behind in the leader ratings.

By election day Gallup had Wilson with a 51% approval rating with Edward Heath, also an Oxford educated grammar school boy, on 28%. The election seemed such a certainty that the Tory “men in grey suits” visited Heath just as the polling stations were closing to say that the party expected his immediate resignation on the Friday.

In the post-election analysis the view emerged that the gloss had simply come off Wilson and voters had started to warm to Mr. Heath who always seemed to play it straight without gimmicks.

Could that be the scenario for 2015? I wouldn’t bet against it. Michael Ashcroft’s 13,000 sample phone poll published in September had some very worrying numbers for the Tories when this question was asked – “And thinking about your own constituency and the parties and the candidates who are likely to stand there, which partyâ€™s candidate do you think you will vote for in your own constituency at the next general election?”

In key Tory-held marginals which they need to hold on to Labour had a 9% lead and the blues were making heavy weather against the Lib Dems.

Polly could be right.