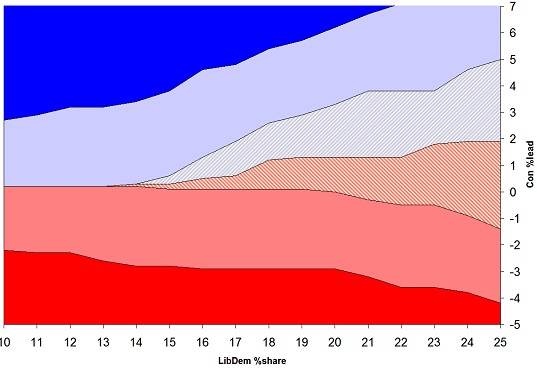 On the overnight thread the long-standing PBer, Rod Crosby, published his contour map of what party vote shares are likely to be required to secure specific outcomes at the next general election with the new boundary proposals.

This, he says, is based on the Anthony Wells notionals, with some adjustments for “LD incumbency, SNP surge, Shinners take 5 and SDLP 2”. The “Shinners” point refers to Sinn Fein members who have a tradition of not taking up their Westminster seats thus reducing the total required for an overall majority.

The basic impact of the notionals were presented in a simplified chart form here last week without the adjustments.

As can be seen the chart shows the huge area when a hung parliament is likely and the potential target vote shares for both the red and blue teams. The smaller areas in the middle, described by Rod as “LD kingmakers” are where a coalition could be formed with Clegg’s party.