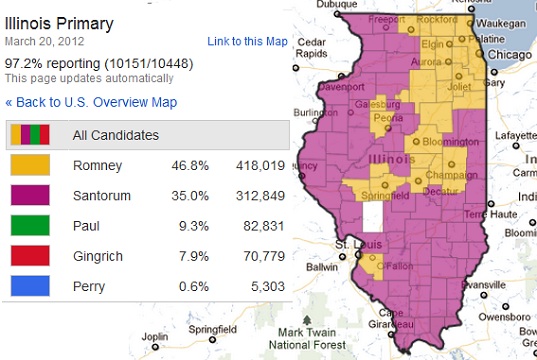 The question isn’t who’s the nominee. It’s whether Romney soars or limps into Tampa. That’s not determined yet.

Romney unable to break through with key constituencies tonight, like voters who do not like Mitt Romney.

Mitt Romney had his predicted big win in Illinois overnight and is set, surely, to take the nomination?

The state is a big one and we saw the usual pattern. Romney winning big in the huge metropolitan area of Chicago with Rick Santorum doing well in the less populated areas of the state.

This, of course, is about delegates, and Romney looks set to win the lion’s share of the 69 strong Illinois contingent which will take him a bit nearer to the magic total of 1144.

Yet again the polls have understated Rick Santorum – this time by about five points which is almost the same as their overstatement of Newt Gingrich.

We now move on to Louisiana on Saturday where Santorum has hopes of a victory. The April series of primaries is much less promising for him and his only possibly victory is in his home state of Pennsylvania.