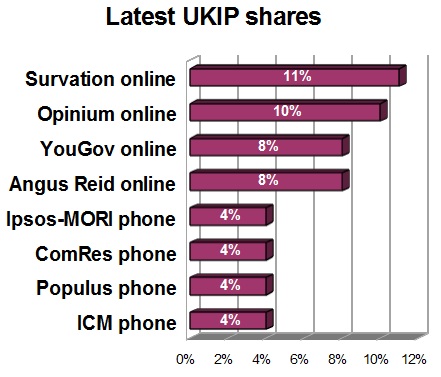 Why the difference with the telephone pollsters?

The big polling story this wekk, apart from the London mayoral race, has been the very high UKIP shares that have been reported.

To track it I put have together the above chart showing the latest UKIP shares across the range of pollsters. The difference is very clear – the online firms appear to have much bigger numbers.

As can been seen the latest surveys from all the telephone polls have UKIP at 4%. The online pollsters, meanwhile, have Farage’s party in the range 8-11%.

It should be noted that with each phone poll the 4% was up on previous polls – suggesting that there is movement – the question is how much?

UKIP’s biggest share is with Survation which includes UKIP as one of its main party choices on the first page to pop up. The others internet firms, I believe, just offer CON/LAB/LD on their opening voting intention questionnaires with SNP/PC as additional options in Wales and Scotland.

Since the 2010 general election I’ve put a lot more weight on phone polling simply because they did so much better. Check out the polling accuracy table here.

This success was repeated at the AV referendum – see here.

Let’s see what happens in the Mayoral vote in London.