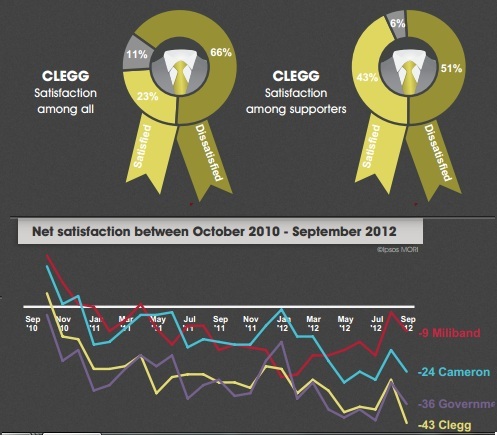 And more polling numbers for EdM to worry about

The big interest is on the leadership ratings, as seen in the graphic above, and the continued decline for Nick Clegg. Not only are these the worst ratings on record for the Deputy Prime Minister just 43% of existing party supporters told the firm that they were satisfied.

This could not have come at a worse time for Clegg just three days before the start of his party conference in Brighton.

Almost certainly it means that the media narrative will be dominated by leadership issues.

But Clegg is not the only leader who has had poor polling numbers today. Although Ed Miliband’s net numbers from MORI have him ahead of Dave some other questions in the survey could raise doubts amongst his detractors.

When the public is asked which of David Cameron or Ed Miliband is strongest on a range of leader characteristics,Â David Cameron has the lead on most image ratings:

This follows the Populus poll a couple of days ago when 60% of the sample said on a forced choice that they’d prefer Cameron to Miliband as PM. One in three LAB voters said they’s prefer Dave.