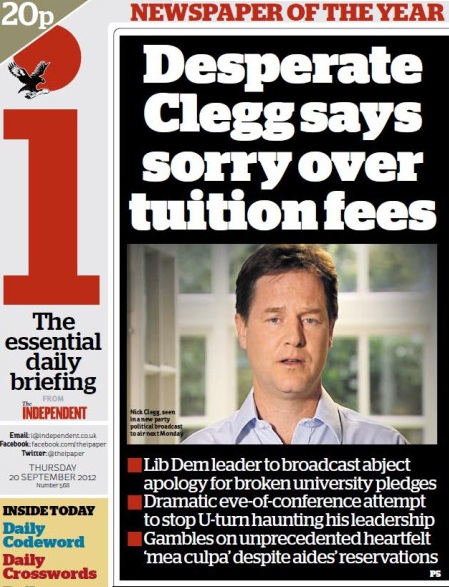 Everything depends on the “apology” turning things round

Unless last night’s “apology” over making the pre-election student fees pledge turns things round for the party then it is hard to see how Nick Clegg can survive until the general election.

Parliamentary parties are generally unsentimental about these things.

If enough of a party’s MPs think that there’s a better chance of holding onto their seats at the general election with a different leader then with the Tories and Lib Dems action will be taken.

Labour doesn’t quite have this tradition and ended fighting the 2010 election with someone who was unelectable at the helm.

The thinking behind last night’s move was that it brings Clegg’s position out into the open ahead of the Brighton conference. This starts on Saturday and it was inevitable that there’d be a massive media focus on the leadership. The hope is that this pre-empts it and after a few days things will have calmed down.

A lot depends for him on the polling and, if he’s still there then, what happens in the local elections next May.

Ladbrokes offer 5/4 the Clegg won’t be Lib Dem leader at the next election and 4/7 that he will. The William Hill prices are 8/13 that he’ll survive until the election and 6/5 that he won’t.

There’s a longshot 16/1 being offered by Ladbrokes that Clegg will be out by the end of the year.

Generally, as I’ve observed before, leaders who are in trouble have reasonably good party conferences. The party faithful get behind their man in public. It’s at Westminster behind closed doors where the real danger lies as MPs ponder their future.