Following on fromÂ last night’s phone pollsÂ from Populus and ComRes which showed UKIP Â vote share increasing with the phone pollsters, Lord Ashcroft hasÂ publishedÂ some polling on UKIP, from which we learn

[The] research finds that 12% of those who voted Tory in 2010 now say they would vote UKIP in an election tomorrow. Half of all those who would consider voting UKIP supported the Conservatives at the last election. 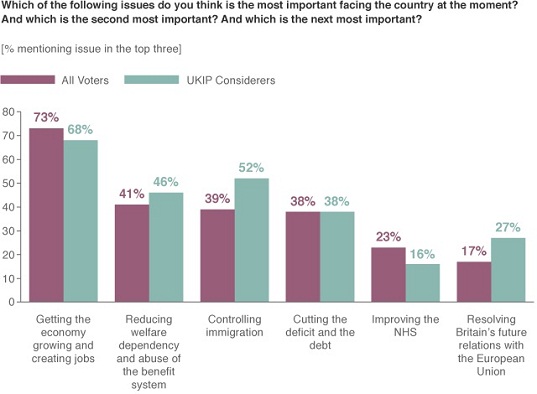 I found it odd/interesting that CameronÂ said yesterdayÂ he saw withdrawal from the EU imaginable, which some have interpreted as a referendum on the EU will be offered by Cameron.

Following on from the lack of a referendum on the Lisbon treaty, even though he made a cast-iron guarantee, I’m not sure any future offer a referendum by David Cameron would have any credibility or be a vote winner in the eyes of UKIPers/Eurosceptics.

As we can see from the Ashcroft polling, resolving the UK’s relations with the EU is the fifth priority for those UKIP considerers, so offering a referendum on Europe may not win back those who are switched to UKIP or are considering to do so, as the economy, jobs, reducing welfare dependency/abuses, immigration and cutting the deficit/debt rank higher.

As the deficit has been lower since the coalition took office, this may lead to Cameron winning back some support from the UKIP considerers, if the deficit is lower at the 2015 general election than what the coalition inherited.

There has been recent controversy over welfare and benefits, such as theÂ Tory tax credit ads ‘a new low’Â and the upcoming benefits increase that Labour are set toÂ oppose, this could give further opportunities to win these UKIP considerers.

And with Ed Miliband saying LabourÂ got it wrong on immigration, that again presents Cameron with opportunities.

When Cameron finally makes hisÂ long anticipated and much delayed speech on Europe, it will be interesting see how the votersÂ identified by Lord AshcroftÂ respond to that speech, hopefully Lord Ashcroft will follow up with some more polling.