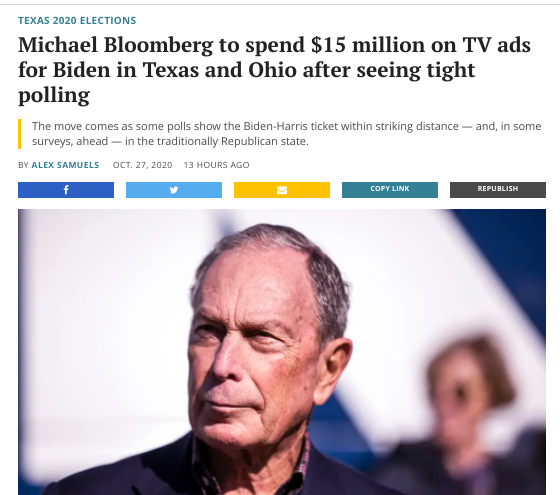 For the most part, both Biden and President Donald Trump have avoided general election campaigning in Texas. Trump hasn’t visited the state since the summer, while Biden’s last appearance was in March. In the last month, however, Biden has sent a flurry of surrogates to the state to campaign on his behalf. His running mate, U.S. Sen. Kamala Harris of California, is planning to visit Texas on Friday.

Bloomberg has already pumped tens of millions of dollars into Florida (29 ECVs) and his hope is that this will help unseat Trump in the election next Tuesday.

The ads, which begin running today will focus on Trump’s mismanagement of COVID-19 crisis. The Texas commercials will run in both English and Spanish.

What’s significant about the move and the timing is more than the ads it allows to be bought – for it creates big news stores in the two states and focuses attention of voters on their election being highly competitive.

According to Nate Silver’s site the current polling averages have Biden trailing Trump by 1.3% in Texas and 1.6% in Ohio.

As PBers will know I’ve been betting on Biden in Texas because of the scale and effort of the campaign in the state which is being led by another former White House contender, Beto O’Rourke.

Nearly 8m people have already voted in Texas – the equivalent of of 86.9% of the WH2016 total vote making it the state with the highest level of early voting.