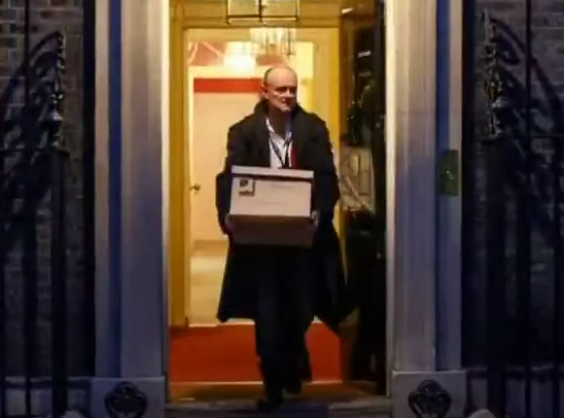 The odds should still remain on No Deal

Coincidence? Maybe. Dominic Cummings’ departure from Downing Street has been a long time coming. Ever since that fateful dash to County Durham during the first lockdown was revealed to the media, he’s been a man living on borrowed time. But then he always was.

Cummings claimed in a blog at the start of the year that he wished to make himself largely redundant to Number 10 by the end of the year. Well, mission accomplished. Or not. That line came from his famous blog where he reached out to “weirdos and misfits”, and others, to improve performance and create “the sort of expertise supporting the PM and ministers that is needed”. If that was what success looks like, he’s fallen very far short. True, he didn’t know that Covid-19 would become a global pandemic but then Black Swans are a feature of government and in any case, a prime driver of radical change. He failed despite Covid, not because of it.

But what Cummings never understood, or took heed of, despite his success in leading public vote campaigns – most notably Vote Leave in the Brexit referendum – was that politics is above all a people business. Being wantonly rude and making enemies needlessly is a fast path to failure. People will remember and will rarely forgive. While directness and confrontation can sometimes be necessary in the short term, you cannot fight all the people all the time. Referendums have no aftermath; governing does. There comes a point where the hassle simple isn’t worth it. Besides, as noted, what benefit was he actually delivering anyway?

Which brings us back to the original question: timing. Maybe the toxic atmosphere inside No 10 just came about organically, as the culmination of months of dismissiveness and factionising; maybe it was one comment too many that broke the relationships beyond repair. Or maybe there was something of more substance, of which we’re not yet fully aware.

This next week is critical in terms of Brexit. I know we’ve said that before but this one really is. The government ruled out an extension to the transition period in June, meaning that it ends in seven weeks unless there’s a whole new treaty to extend it. That might be possible – it could probably be done in only one or two clauses, amending the date in the Withdrawal Agreement – but would still need full ratification across the EU. If a deal is not done this week, whether a substantive trade one or a rollover transition one, No Deal on January 1 becomes all-but inevitable.

The reason for that is simple: the EU holds its next European Council on Thursday (by videoconference but a meeting all the same). That is the last realistic moment a deal could be signed off, not just because of the heads of governments’ calendars – another meeting could not doubt be arranged – but because deals need translating with legal tightness and ratifying.

Was the bust-up in Downing Street over what to do about Brexit? Is it significant that the two casualties were both core members of Vote Leave? Does that indicate that Johnson is about to offer a major concession to the EU? We can’t know yet but it’s certainly a possibility.

Three things stand in the way of a deal being done. The first, as mentioned, is time. The second is expectations. Both sides have been preparing for No Deal while continuing to talk – but no meaningful progress is being made on the key sticking points. The rest of the Agreement may well already be fully settled and translated into legally-tight language but unless compromise or concession is offered on fish, subsidy regime and governance, a deal cannot be done.

And the third, following on, is political pressure. Both sides do not want to compromise on what they believe are core principles of the Union (on the European side) or of the rationale for Brexit (on the British one). We know that the EU always concedes as little as possible: we saw that with both Cameron and May, despite where that inflexibility led. It is unlikely to be any more accommodating to a government which is joyfully promoting the benefits of Brexit, while also ripping up a critical part of the Withdrawal Agreement. But its demands on governance and the level playing field are going to be hard for the UK to accept, as they always would have been, and run counter to what Brexit is supposed to allow.

And HMG has, for whatever reason, introduced the Internal Market Bill which it has invested political capital in and must know is unacceptable to the EU.

Does Cummings’ departure signal, or even enable, a change in policy? Maybe – but the odds are still stacked heavily against a deal (whatever the markets might say). I don’t see how a deal can be done if the IMB is still sat before parliament with the contentious clauses on trade between Britain and N Ireland not definitively removed.

Is Johnson thinking about junking the Bill? Maybe. Consistency has never been his strongest suit but if he does, he’ll be spending more political capital. MPs and ministers do not appreciate being marched to the top of the hill only to be marched back down again. Particularly for something as controversial as breaking an international agreement. Following on from the dismissal of Cummings, six months after it was due, it would indicate on the part of No 10 a desire to do the right thing, after exhausting all other options.

If it is to happen, it’ll need to be by Tuesday. That therefore becomes the deadline for the government to decide whether it’s serious about doing a trade deal with the EU. I don’t think it will. Whether by miscalculation or design, No Deal still looks favourite to me.