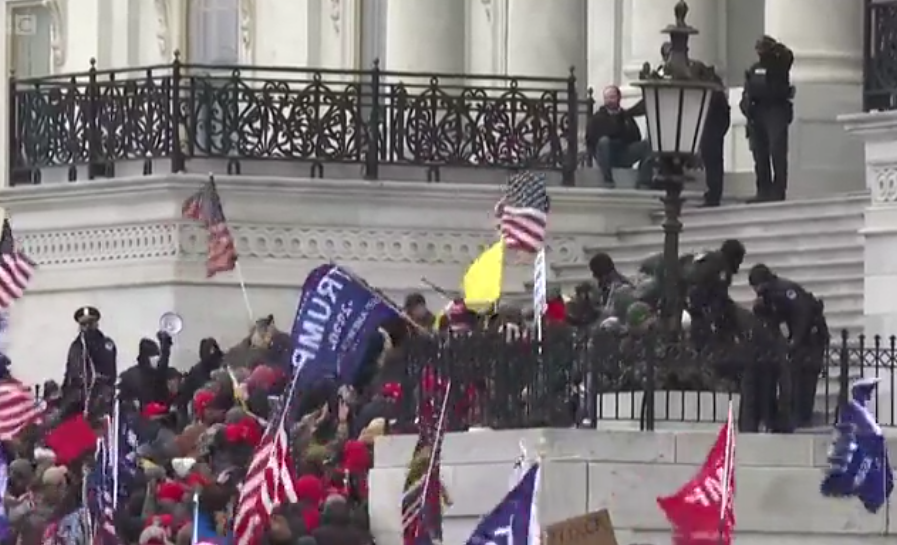 Where did it go wrong for Donald Trump? Wednesday’s events will prove a watershed moment for his political career. Beforehand, he was absolutely dominant in the Republican Party, with the expectations of many that he would remain so even out of office. Now, that aura of raw power shines far more dimly – not merely because he finally crossed a line unacceptable to many in the GOP but because he looked foolish in doing so.

What should be in no doubt is what Trump wanted: he wanted to overturn the outcome of the election and remain in office. All his actions and words over the last two months have been to that end. We should not mince words here. Attempting to overturn a lawful, free, fair election result and replace the legitimate government with a false one is sedition, insurrection and amounts to a coup.

Lawyers might quibble that it’s not a crime to abuse constitutional processes to overturn that result; to – for example – reject Electoral College votes for no better reason than partisan advantage, if the law permits Congress to do so without having to give an adequate justifying reason. I disagree: it fundamentally undermines every principle of fair elections to only count the votes you want to. However, if you do want to undermine democracy like that, you can’t just do it with some bullying phone calls and demonstrators in fancy dress.

Trump’s career lies in tatters not so much because he attempted a coup but because it was a shambles. Had he understood better what was needed, he might well have succeeded and American democracy would be a thing of the past. It was that close. His fatal error was to believe that he could act as president as he did as head of the Trump Corporation; that he could act in politics as he could in business or light TV entertainment.

To be fair, much of his style was transferable and but for Covid, could very easily have seen him through into a second term. As long as he didn’t have anything too serious to deal with, the exceptionally strong brand name he’d built up and, crucially, allowed others to believe they had a stake in, combined with a complete lack of ethics and willingness to bully, intimidate, threaten and lie about opponents and allies alike made him a unique phenomenon. He was winning by playing rugby while the rest were playing football.

All of which should have been foreseeable. Trump’s record as head of his business was that of an absolute dictator, where he expected every demand to be met by underlings who were entirely loyal to him – and if they weren’t, they could be replaced with others who were.

Where people tried to oppose him, he use the law as a weapon, knowing that the threat of legal action – whatever the merits of the case – could often be enough to force a change of mind and the enable him to get his way. Indeed, for Trump, that was the primary purpose of the legal system: not a framework to operate within to resolve disputes or define agreements, nor a system to deliver justice, but a means by which he could extend control and advance his interests. As he said more than once, if you’re famous enough (or, implicitly, rich or powerful enough), then you effectively have impunity. And in truth, that’s not far wrong.

Likewise, that he demanded that his Attorneys General act effectively as his personal lawyers, or heads of the FBI act as his personal police should come as no surprise. For Trump, there is no division between the political and the personal. At one point he referred to the start of his presidency as “when I took over the United States”: that was only a verbal slip in the sense of revealing a mindset it would have been better to have kept revealed. He has consistently acted as if the United States government – all three branches of it – were part of his personal property, just as he’s demonstrated a similar sense of ownership of the Republican Party; a point Don Jr crassly asserted on Wednesday.

That sense of being America’s Godfather, however, has been his undoing. His belief that legislators and judges either owed him an obligation, or could be intimidated into obedience was misplaced.

Ever since November 3, Trump’s strategy has made no objective sense unless we accept the mentality sketched out above. He could not have chosen the paths he did unless he genuinely believed that Republican officials, elected representatives and Republican-nominated judges were primarily there to enable his bidding. His phone call to the Georgia Secretary of State, Brad Raffensberger, was as good a recent example as any.

Nor was that expectation entirely deluded. Trump had dominated much of the Republican Party as if he owned it. Even after his supporters invaded the Capitol, more than half the House GOP congressmen voted to reject the Arizona Electoral College votes. But half wasn’t enough. Indeed, all of them wasn’t enough given that the Democrats have a majority there.

Which brings us back to the events of Wednesday. Once again, he placed his faith in the belief that Republicans – led by his Vice President – would subvert democracy, reject the actual results and substitute their own, handing Trump victory. That neither process nor numbers could deliver that didn’t seem to bother him.

This is where it gets dark. There are only really two explanations for what happened next. The first is that it was theatre that got out of hand; the other is that he always intended to use his supporters to physically intimidate Congress (and the VP, if necessary), using as much force as necessary, to get what he wanted – but screwed up the execution.

The first explanation is not implausible on the face of it. We know Trump likes big rallies, he likes to threaten, he doesn’t concern himself much with risks to others or of consequences of what pleases him.

Except for security. Why was the Capitol so badly protected? Where were the police? Why was the demonstration not corralled into a controllable space? Why were key points inside Congress left insecure? Why were those who invaded just let back out and not arrested? Where was the National Guard? The failings were so great and so numerous that it has the clear look of going beyond incompetence and into complicity.

The Capitol Police force is an Executive agency but (uniquely) one that is accountable to Congress. The DC National Guard, by contrast, is under the command of the President via the Defense Secretary. It’s worth noting that Trump has purged virtually the whole civilian leadership of the Dept of Defense since November’s election. The most obvious answer as to why the National Guard weren’t available to reinforce clearly inadequate policing is because Trump didn’t want them there. Trump might not have had Wednesday’s scenario in mind from back in November but I doubt his personnel changes had little to do with anything but perceived loyalty to him.

But having created the opportunity, he then wasted it. Or, more accurately, having created the opportunity, Trump failed to follow through. Had enough of his supporters been armed and disciplined, there might well have been a bloodbath (and enough might have meant only a few hundred). Pence, Pelosi and any number of Representatives and Senators could have been killed and the numbers in Congress changed sufficiently to alter the votes – or beaten and/or locked up, to the same effect. And when the police caved so weakly, they couldn’t have known that the protesters didn’t include an armed section. They did chant “Hang Mike Pence” as they marched and mobs have their own dynamic, especially when stoked by Trump and Giuliani as they had been.

What might have followed? Who knows. Democracy would, at that point, have fallen. Insurrection and sedition would have been achieved. Tidying up would have been necessary, presumably ensuring one way or another that the judiciary didn’t check the coup – but once paramilitary action or mob violence has been legitimised, using it a second time becomes far easier, especially when you have the power of pardon in your pocket (technically, the president can only pardon federal crimes but once you subvert the judiciary too – essential after any coup – that detail doesn’t really matter). Would the military intervene? It’s unlikely, if they’re ordered not to. While the army might well refuse unlawful orders, it’s a wholly different thing for them to independently initiate action.

That is how close the shining city on a hill came to burning down this week – at the behest and design of its own leader. Fortunately, Trump failed to prepare the elementary steps of a coup, putting too much faith instead in his own executive authority. He did so in part because he didn’t align his goal with his means, and in part because his personal experience outside politics cast too long a shadow over his decisions in it.

America has been fortunate to have such a warning at such a relatively low cost. Trump will leave office but unless the poison is drawn from the system, the threat will remain. It must learn the lesson.