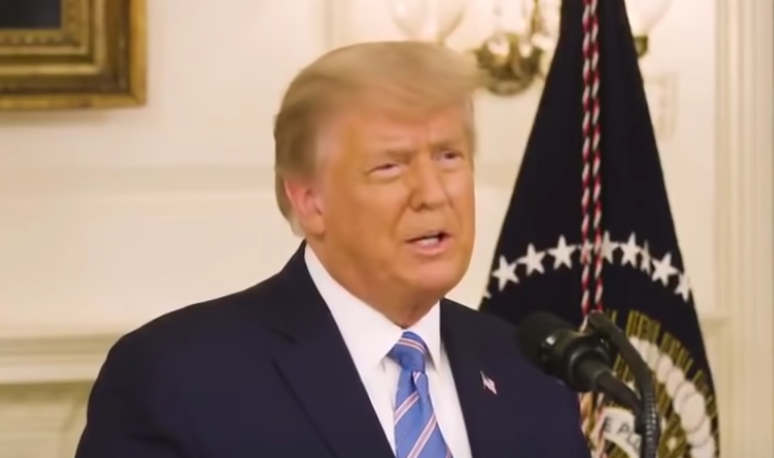 A guest slot by Richard Tyndall

“The 75,000,000 great American Patriots who voted for me, AMERICA FIRST, and MAKE AMERICA GREAT AGAIN, will have a GIANT VOICE long into the future.”

“The 75,000,000 great American Patriots who voted for me, AMERICA FIRST, and MAKE AMERICA GREAT AGAIN, will have a GIANT VOICE long into the future.”

Ignoring for a moment the fact that Trump has added over three quarters of a million votes to his actual total, one cannot ignore the fact that approaching half of the votes cast in November went to a man who has been exposed as a liar, a bully and, at times, borderline psychopathic. Rather than just discounting these votes as uneducated, racist, MAGA conspiracy theorists, it is perhaps worth considering why so many Americans thought they had no alternative but to vote for someone so unpalatable. That reason, I contend, is desperation.

Last August Stephen Rose wrote an article for the Brookings Institute in Washington looking at the changing fortunes of the Middle Classes in the USA between 1967 and 1981 compared with 2002 to 2016.

On almost every metric possible life has got worse for those below x5 FPL between the two periods.

Put simply, before we even start to consider the increasing costs of the two staples of health and education, the financial situation of those in the Middle Classes in America has significantly worsened since the 1980s, a deterioration which was accelerating after the financial crash of 2008.

The causes of these changes are many and there is clearly no one solution to them. But it is undoubtedly the case that globalisation and the offshoring of jobs was perceived as part of the issue. According to the US Population Reference Bureau in 2008 an accountant in India earned on average $5,000 a year. An accountant in the US doing the same job earned $63,000. Why, in an age of almost instant communications, would a company spend twelve times as much to get the same service? This applied to a whole range of service and manufacturing jobs. In 2018 the number of jobs offshored by US companies stood at 14.4 million. (To be fair at the same time there were 7 million jobs outsourced into the US by non-US companies but there is still a huge imbalance). And this is before one considers the increasing productivity and automation of manufacturing within the US which accounted for millions more lost jobs. The claim was that cheaper costs meant cheaper prices but what it actually meant a lot of the time was higher profits for the companies. Globalisation was and is failing a large proportion – probably the majority – of the population.

Meanwhile politics in America was split between those who wanted to improve matters for the lowest segment of the population – those close to or below the poverty level – and those who saw free markets as the answer to all America’s ills and ignored the fact that the fastest growing incomes were restricted to the Upper Middle Classes and the Rich. The ‘Squeezed Middle Classes’ who represent the majority of US workers and families were, to a large extent, ignored. Nor was there anywhere else for these forgotten masses to turn. The Democrats were just as wedded to the ideas of Globalisation as the Republicans. Perhaps even more so.

It is this disparity and this feeling that they were forgotten and scorned by the political classes which, I believe, was the driving force behind Trump’s rise to power. I do not mean that he actually cared about this issue. It was just a convenient vehicle for getting him all the way to the White House. But the fact that a shyster was bright enough to see that he could use this issue doesn’t mean it wasn’t a real one. He was fortunate that his arrival in the White House coincided with an upturn in the US economy and certainly his headline policies with instigating a trade war with China and trying to force US companies to return jobs to America paid some dividends in the short term. It is for this reason I believe that, whilst he has only really been paying lip service to the issues, he is seen by many of those who felt left behind, to have been on their side and attempting to do something about the issues.

Now, with his whole presidency having turned toxic in the worst possible way, addressing the issues which still exist for large swathes of Americans today, also risks being tainted. Once again, the Middle Classes will see themselves as unrepresented and, with the same old faces of the pre-Trump era (Biden, Pelosi etc) now back in charge, we risk them falling victim to the next demagogue who decides to make a run for the highest office. And we cannot rely on the next one being so incompetent and obviously flawed.

What the new US administration desperately needs to do is to separate righteous and completely understandable anger at Trump from scorn for his many tens of millions of former (and if the polls are correct still current) supporters. I would like to think they are capable of doing this and taking these problems seriously – even if there are no immediate easy answers to them. I will reserve judgement on whether they are actually capable of doing this.