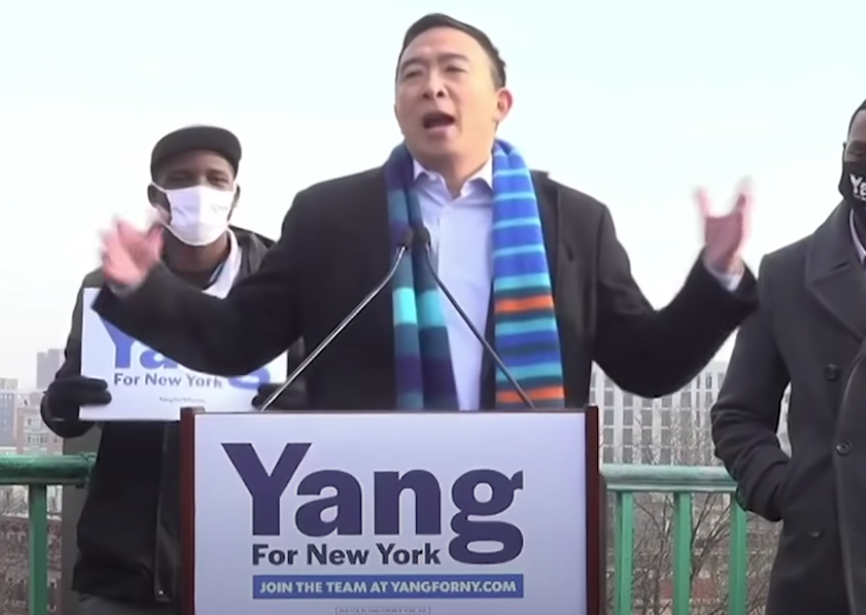 Sadiq Khan is cruising to victory in the delayed London elections, but it’s all to play for across the pond. Bill de Blasio is term-limited, and Democrats have 5 months to choose his successor (in their primary, the Republicans have little chance in the general). There are 38 candidates who have filed and the frontrunner is the both the wildcard and the only one you may have heard of…

Andrew Yang (2/1 at Ladbrokes) may have come 9th in the Presidential primaries but he would have won the ‘Most improved profile’ award. A complete unknown two years ago, his rather millennial approach to politics garnered him a mountain of positive press and a legion of deeply enthusiastic online fans. He leads in the first two polls – albeit with 15-20% in a very spread field.

As with his Presidential run, Yang doesn’t easily fit on either the left or centre/right of the party. He is again pushing his Universal Basic Income policy, but UBI combined with his ‘Silicon Valley Libertarian’ vibe has won an eclectic mix of endorsements from Richie Torres (a left-wing Congressman, until recently a fairly prominent City Councilmember) and Anthony ‘The Mooch’ Scaramucci (Trump’s shortest-serving Press Secretary).

More traditional candidates include Eric Adams (4/1), the  Borough President of Brooklyn who represents the centrist wing, and Scott Stringer (4/1), the Comptroller (sort of like City Chancellor of the Exchequer) who holds endorsements and policy positions from the progressive wing. Unlike Yang, they both have significant experience in New York politics – and were expected to be the frontrunners until Yang entered the race.

Other major candidates include Maya Wiley (10/1), an aide to Bill de Blasio running as the continuity candidate, and Kathryn Garcia (16/1), who has run various city agencies. In a city once governed by billionaire Michael Bloomberg, Raymond McGuire (4/1) fills in the ‘Self-funding businessman’ slot on the ballot – though he hasn’t yet proved there are voters to back up the money his campaign can bring to bear.

The key question is whether Yang can reach out across traditional factional and racial voting blocs and draw support from everywhere, or if he is a weak frontrunner buoyed up by name recognition. His poll lead is a good sign, even if it’s a very split field, but I do worry his lack of local political ties or experience make him vulnerable to a ‘True New Yorker v Outsider’ message. And as campaigning goes on, I do suspect his media profile advantage will fade as locals get to know the others better too.

In some ways Yang is not just an unusual fit, but a poor one, for New York politics. As a city which calls itself ‘The Greatest City in the World’ New York tends to elect people with the same worldview. Yang has no record in the city government and has already been mocked for moving out of New York during the pandemic instead of sticking it out in the Five Boroughs, and for recording a campaign video about bodegas in a store which (Twitter replies made clear) no true New Yorker would ever call a real bodega. The latter of these especially may seem trivial, but these missteps are the opposite of Yang’s easy ‘Dude who gets it’ persona which he leans heavily on. Perhaps media coverage won’t be the unalloyed boon to this campaign that it was when running for President.

Adding spice to the primary is the fact that AV will be used for the first time, so a winning candidate needs to develop a broad base. This could work in Yang’s favour and against the factional candidates, but if the YangGang’s fervour ends up putting off the wider public then it might undermine his chances.

Yang has at least as good a chance as anyone. But I think it’s wrong for him to be a pretty strong frontrunner at this point. His lead hasn’t proved durable yet, nor has he proven himself effective at campaigning against the attacks a frontrunner will face. With so much yet to happen before the primary we could be anywhere in 5 weeks, let alone 5 months (just check out how volatile the 2013 primary was), and a big name could even still enter the race. Yang should be 4/1 or so with the other major options – and I’ve laid him on Betfair accordingly.